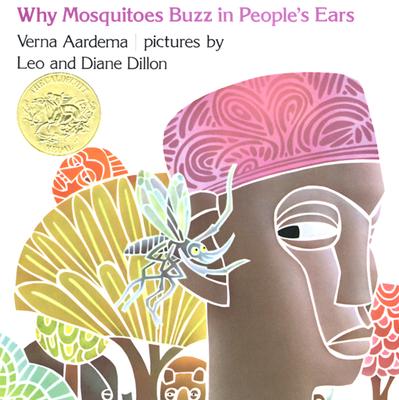 Celebrating 75 Years of the Caldecott Medal

Why Mosquitoes Buzz in People’s Ears

By Verna Aardema, Illustrated by Leo and Diane Dillon

Ah summer time! Filled with loads of outdoor activities including sun, surf, out door picnics and, playing as a summer soundtrack, the whine of the mosquito!

Continuing the Snuggery’s yearlong celebration of the 75th Anniversary of the Caldecott Award for the best picture book of the year, here’s “Why Mosquitoes Buzz in People’s Ears”. Brian Selznick has designed a medallion for the 75th Anniversary and on it are ten iconic figures from past Caldecott winning books. You can see it on the Snuggery Facebook page.  And the mosquito from this book is one of the ten!

Have you or your child ever wondered why this annoying insect that leaves lumpy love bites has such a whiny sound? Must be a disgruntled type that needs reassurance, eh? Well, this Caldecott winner of 1976, with award winning art by Leo and Diane Dillon answers all questions. It is taken from a West African folk tale retold by Verna Aardema. The Dillons, by the way, were back-to-back winners of the Caldecott the following year in 1977 as well with their artwork for their stunning alphabetical listing of African peoples in “Ashanti to Zulu: African Traditions.” Both are certainly worth a young reader’s time to see classic picture books at their best. And summer is the perfect opportunity as the pace of living hopefully slows to allow catch up reading time with your child. What better place to start than tucking in some of these Caldecott winners amidst the summer reading mix!

The African tale of the origins of this whiny insect starts on a bright sunny morning where an iguana is placidly drinking at a waterhole. Along comes the whiny one with an observation that he has seen a yam as big as he. The iguana, being a perfectly reasonable fellow, derides this stuff and nonsense twaddle and promptly puts two sticks in his ears to drown out the chatter. This is a bit extreme, I do admit. But, unfortunately for Mr. M it starts a long chain of cause and effect to begin among the animals of the jungle. And, he is to blame! The python slithers by and tries to speak to his friend, the iguana. No go. With two sticks in his ear, communication is definitely impeded. However the snake jumps to the conclusion that the iguana is peeved about something and assumes foul deeds are afoot via the iguana. Where to hide? Ah, the rabbit hole of course which promptly sends the rabbit scurrying out, which in turn is witnessed by a crow. There must be danger afoot, no? So, his alarm is heard by the monkey, who naturally assumes a “dangerous beast” is prowling the forest and begins crashing through the treetops. You get the idea.

Parents may like to be made aware that within the teaching of the long string of cause and effect, there is a death of a small owlet, inadvertently brought on by the monkey’s feverish retreat through the trees. Naturally the Mother Owl grieves the loss of her young one and ceases to hoot for the sun to rise. Nights grow longer and longer with no sun, so King Lion calls a council of the animals filled with witnesses, who tell their tales in turn, backtracking to the whiny one who lies in hiding.

So this summer when you hear that familiar whine, it is the mosquito asking in plaintive tones, “Zeee! Is everyone still angry at me?”

Mr. M do you want honesty here or do you want the soft sell? YES! That’s why everyone keeps swatting you away!

Kids will like the cumulative ongoing action of cause and effect. And, as I mentioned, some children may be upset by the death of the owlet, but it is handled in a soft and muted way by the art.

The “KPAO” and resounding slap of the last page is something every adult and child can identify with this summer.

And hey, I bought a small wooden desk plaque I saw recently, inscribed with the words, “NO WHINING!” The designer must have had the little fellow in mind. Mosquitoes don’t read, do they? Sooo, perhaps sometimes, we, might whine? But then again, such a thing is an outright impossibility!