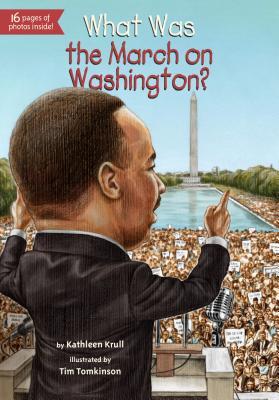 It is a day of service and reflection of the man who opined:

The function of education is to teach one to think intensively and to think critically. Intelligence, plus character – that is the goal of true education.

As we approach in 2021 the commemoration  of the 58th Anniversary of the historic March on Washington on August 28, 1963, culminating with Martin Luther King’s defining “I Have A Dream” speech at the Washington Monument,  I thought it was an opportune moment to introduce a fantastic young reader’s historical series.

For want of better phraseology, one might call it the “What Was?” and the “Who is? series.  It is so well done; I think the collection deserves a place in every elementary school library. It does a superb job of defining, explaining and putting into a historical context, people and events that have contributed to a historical or cultural impact on our country.

Fifty-eight ago, it may be difficult for young people to fathom how supposed “equal rights” were anything but equal in this country for African Americans. Existing laws for generations resulted in what were called “Jim Crow” laws, legislated the differences in schools, and allowed segregation in certain public facilities such as swimming pools, amusement parks, restaurants and in other areas of daily life.

It took a March on Washington to help galvanize the conscience of the federal government into realizing it had to take action. President Lyndon B. Johnson signed The Civil Rights Act in March of 1964, less than a year after the March, completing the legislative work begun by President John F. Kennedy before his assassination in November of 1963.

In this title, starting with a descriptive map of the route of the March itself, the book gives young readers of say, 8 and up, a clear and concise historical frame of reference for the event that gave equal rights for black Americans a huge shot in the arm as far as its visibility and participation by both black and white people as it intermixed groups of marchers of all ages. At that time, it was the largest protest ever held in America, some 250,000 people!

The book includes 16 photos that lend a genuine feeling of time and place that seems to escape us with the passage of time, the farther we get from it. The photos include pictures of separate water fountains for white and black populations, separate schoolrooms for both races and culminates in pictures of the March itself and those present.

The book provides stories of important people involved both that day, and in the formative years of the equal rights protest, such as Thurgood Marshall, Rosa Parks, A. Philip Randolph, and Bayard Rustin to name a few. Also, performers such as opera star, Marion Anderson, performed and sang, “He’s Got the Whole World In His Hands” that day. Gospel singer, Mahalia Jackson, a friend of Martin Luther King, Jr., who, according to the book, would sing to him over the phone when he became discouraged about civil rights, are included here to round out a total feel for the many who made the March possible. How’s that for a friend!

The New York Herald Tribune would trumpet the following day that it was “a national high-water mark in mass decency.”

If you want your child to have access to a series such as this that rounds out history with both the factual and human portraits that shape such events, then why not try some of the additional titles in the series too.

“What Was the Alamo?”

“What Was the Boston Tea Party?”

“What Was the Gold Rush?”

“What Was the First Thanksgiving?”

“What Was the Battle of Gettysburg?”

“What Was Pearl Harbor?”

As I mentioned, your young reader might also enjoy, along with you, another series entitled “Who is.” You both will find out in depth about recent people of achievement such as Steve Jobs, Bob Dylan, Jim Henson, J. K. Rowling, Walt Disney, Mark Twain and Dr. Seuss, as well as noted historical figures such as Abraham Lincoln, Paul Revere, Helen Keller, Nelson Mandela, Charles Darwin and others. Bibliographies to encourage follow up reading are in the back of the book!

These are two wonderful series to give your child a front seat to history,  past and present.