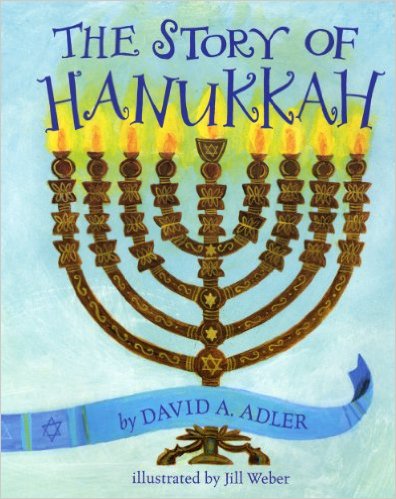 Happy Hanukkah to All!

The Story of Hanukkah

While writing this post, and turning to the back of this picture book, I saw a review from “School Library Journal.” In part it said:

With so much hoopla focusing

aspects of Hanukkah, it is good to

have a book that tells it like it was.

And I thought to myself, how similar this ancient story leading to the celebration of Hanukkah, can get equally underplayed, in much same way that the story of Christmas can sometimes be, if we let it, by the secular celebrations that surround it. Interesting!

David Adler provides a very thorough and interesting introduction to young readers to the celebration of Hanukkah by the telling of its origins in Judea in the Israel of long  ago, and the bold story of the Maccabees.

Kids will learn of the ancient temple, high on a mount called The House of God, and there shone a light called the “ner tamid” that burned always.

Enter the Greek King called Antiochus IV who tears down the walls of Jerusalem and forbids the lighting of Sabbath candles or the study of Jewish law.

And a Jewish leader/ fighter arises among the people named Mattathias that, along with groups made up of shepherds and farmers, battles the oppressive forces.

His son is called Judah the Maccabee or “hammer” and those people that fight with him, are called Maccabees.

In the final battle, against overwhelming 6-1odds, Antiochus and his army are finally routed.

Kids love when the odds are stacked and the “good guys win” and they do here.

Young readers will follow the cleaning of Jerusalem from the rebuilding of its new altar, to its redone gates and doors.

And they find, the “ner tamid, with a small bit of oil left in a jar; just enough for one day, still aglow, after eight!”

So, Judah declares on the anniversary of that date every year, an eight day celebration will occur. And it is called Hanukkah meaning dedication, as it is the day celebrating the rededication of the Temple.

Jill Weber’s warmth of colored acrylic drawings enhances this particular telling of an ancient story, and she even includes her recipe for “latkes.”

It seems when she was a young one, it was her job to grate the potato and onions for the recipe, and she offers the remembrance of this quote: “My hands smelled like onions for what seemed like a week.”

Oh, and Jill, you have my sympathy here, as I had many a skinned knuckle as a kid making potato pancakes!

At the back are also directions for the spinning “dreidel” game, with its use of the Hanukkah gelt of “chocolate gold coins,” raisins, nuts and pennies.

I loved Publishers Weekly take on this book when it opined:

This is a great read aloud for young  families striving to emphasize why a tradition such as Hanukkah continues its importance in Jewish households today, and the historical perspective of why it is commemorated in many family traditions that are remembered each year – and upheld.