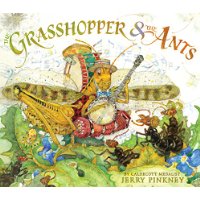 An Aesop Classic with a Meaningful Message!

The Grasshopper & the Ants

As fall silently and soulfully descends with its riot of foliage and scattering of larger than usual acorns, it’s also a reminder of not only the change of seasons …but of things to come.

Winter with its blowing snow, howling winds and scarcity of above ground food for the tenderest of creatures is just around the ant hill.

And Caldecott medalist, Jerry Pinkney, has previously delved richly and artistically into the world of Aesop’s fables in his picture books of “The Lion and the Mouse” and “The Tortoise and the Hare.”

Here, in his rendering of Aesop’s “The Grasshopper & the Ants,” prompted by Mr. Pinkney’s wanderings in his own woods, he relates the familiar story of the ant colonies that toil, store and prepare for the onset of bleaker days, while their fellow creature, the grasshopper, just fiddles away his time as a one grasshopper band!

Mr. Pinkney’s art beautifully captures the dogged determination and work ethic of the Ants, versus the rollicking rhythms of the freewheeling  Grasshopper, as the seasons pass.

The tale opens with spring. The joyful and just-in-the-moment Grasshopper beckons his pals, the ants, to join him in a frolic and go fishing.

“No time to relax”

The Grasshopper pleads playfully again, come summer, and tempts them with the enticement of a picnic of feasting on “fresh, yummy leaves.”

“No summer light to waste,”

Autumn will be here soon.”

Though the Grasshopper points out “the world is a playground of leaves,” the Ants toil on eschewing singing and dancing in Jerry Pinkney’s riot of fall color.

And as the inevitability of winter and its harder realities descend for animals, the Grasshopper is not deterred. He instead pleads:

“Wintertime is for making snow angels

And oh, how I love the sparkle

Alas, as the Grasshopper continues to beg:

“If only someone would join me!”

But, heis left shivering in a winter white world!

Harsh reality does indeed set in for the Grasshopper, as below ground the Ants are snug as the proverbial bugs in a rug. Will they be oblivious to the Grasshopper that fiddled, while they toiled?

Or, is there a balance to be found between fiddling nonstop and foraging at the same tempo? Will these work horse Ants share what they have stored, and come to see that it is the infectious enthusiasm of the Grasshopper and his joyful music that will also FEED them through the winter with HIS gifts of song and story…or not?

Jerry Pinkney’s take on this timeless Aesop fable tale is wonderfully done. His picture book, has a neat fold out page allowing a view of Grasshopper freezing above ground, while below ground are the cozy Ants, lounging in leafy comfort amid the storehouses of food they have labored so hard to attain. This simultaneous view lends itself to a reader’s “What would you do?” query.

And this picture book’s lively back and forth reality of the practical and the poetic in life, perhaps allows that BOTH feed us, getting us through those “winters” in our lives.

It will be very interesting to see what your young reader takes from this classic Aesop tale brought to such vibrancy by Jerry Pinkney, and continues down the centuries to beg the question, “With what do we continually need to feed ourselves?”

Maybe Aesop is subtlety hinting that it not by mere food consumption that we are truly fed, but by a whole host of other things like nature, art, music….and the shared connection to others. And that this is how we make it through the seasons of life.

Do we also work hard? Parents reading this book to their young readers are living proof of that fact. But perhaps, as Mr. Pinkney, via Aesop points out, taking some balanced time to notice what is going on around us should be one of the reasons why we work so hard. And that is to enjoy our life journey through the seasons….of our lives. Each is unique and not to be missed.

Aesop’s tales always had morals. And the usual moral of this fable is:

“Don’t put off till tomorrow,

what you can do today.”

Maybe the Grasshopper is not meant to be seen as such an indolent sloth after all, but someone who sees what needs feeding is the heart and soul, every bit as much as the body.

Just maybe Aesop continues today to say to parents and young readers, “Don’t put off  tomorrow’s responsibilities and joys too long, as the perfect time and season to do both, is now.”