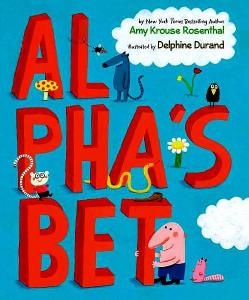 As the first few weeks of Back to School roll out for families attempting to adjust to school schedules and the new “order of the day”, an ABC book came to mind for young readers. And it prompts the question, “Did you ever wonder WHO put the 26 letters of the alphabet in ABC ORDER for countless generations that have enunciated them in sing song fashion?

New York Times best selling author Amy Krouse Rosenthal, author of “Little Pea” and “One of Those Days”, does.

Like many other things in life, it all depends on how you look at things and Ms. Rosenthal has chosen to roll out the alphabet in a refreshingly imaginative way.

It’s not JUST the same ole ABC’s. It’s their STORY, and don’t kids love stories, or at least one VIEW of how they came to be, well, in ABC order?

Enter Al Pha in the time of long ago of course. In point of fact this is the VERY long ago as in the time of the invention of FIRE, the WHEEL and SHADOWS (might THIS reference to SHADOWS be a nod of the head to Plato’s cave theory relating to the allegory of knowledge? This could lead to a VERY interesting turn in the story telling road). We’re talking VERY olden times here!

Anyway, the king announces a contest for the organization of the letters of the alphabet that had just been thrown together willy-nilly! The lure of being famous AND remembered “for all time” prompts Al to enter with both feet. SHH! Private BET time as Al tells NO ONE of his plan. Remember the BET! Al collects his burlap bag of letters from the palace and is off and running on an organizational quest. The easiest letter to come first is A. A is of course, for Al!

And what follows is a very interesting take on the progression of the letters AND what prompts their groupings. Could a bee casually buzzing by Al be responsible for its place as #2 in the list of 26? And what about E and F closely resembling each other? Could they be TWINS? A snake’s hiss and S is assembled, but not before the reaction of Al with an “Arrrrrrrrrr”, that precedes the S! As Al nears the end, it’s a literal “toss up” of X and Y to see in which order they will be arranged.

Dragging the ABC burlap bag BACK to the king, Al and the king wind up in a duet, SAYING AND SINGING the letters that tons of school kids have recited in the same way. Al is a shoe-in for fame.

So, Al Pha won the BET! What a neat tying up of loose ends, Ms. Rosenthal. AND it’s the end of the story, but not of Al and Ms. Rosenthal’s cunning take on the history of the ABC’s.

And hey, Delphine Durand’s “thumb like”, red-panted Al is perfect for a “Where is Thumbkin?” illustration. But THAT is ANOTHER story!