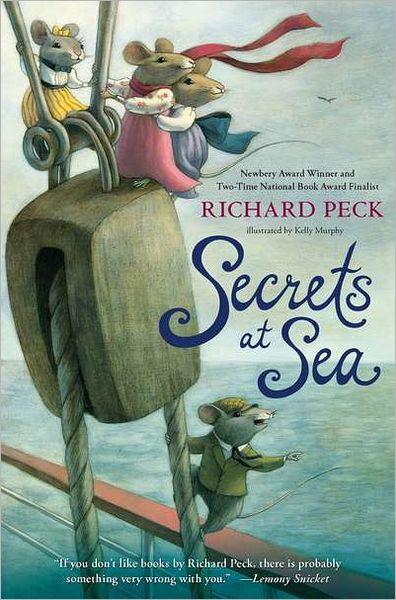 Award Winner Richard Peck Is At It Again!

Richard Peck, he of Newbery Medal fame for A Year Down Yonder has previously given his followers richly imaginative reads in this trilogy which includes A Season of Gifts and A Long Way from Chicago, in which Mr. Peck gives children’s literature one of the great character creations in the person of his Grandma Dowdel. She is alternately laugh out loud funny, devious, wise, irascible, and above all one who metes out justice and kindness in equal measure.

If your YA reader or even those a smidge younger, have not discovered these, please do run to the bookstore. They are funny, piercingly powerful with their ability to x-ray the human condition and its struggles, plus delightfully entertaining at the same time. Mr. Peck has it all well in hand.

He knows the territory of a child’s heart with its complexities like the back of his hand and is not afraid to shine the light for both parent and child. His writing can be howlingly funny and yet do a hairpin turn into dramatic depth, but all with a deftness of touch that is pretty amazing. His writing is a national treasure for children. Mr. Peck knows kids and does not write down to them!

Having said that, I was happy to crack open his latest writing turn called Secrets at Sea. In it Mr. Peck introduces us to a family of mice, to wit: Helena, Beatrice, Louise and Lamont, whose lives and fates are inextricably woven with the human inhabitants whose home they share – the Cranstons.

Think mice have it easy? Think again. They have worries and issues just as humans do. Secrets at Sea is a sort of PBS Upstairs/Downstairs for mice. For example Helena, the eldest worries as surrogate parent what may befall her harum scarum brother, Lamont, the secretive and romantic Beatrice and the overly critical Louise.

The human Cranstons, on the other hands’ main worry is their social standing, rising or falling on the finding of a husband for the plain and plagued Olive. Oddly enough, the fortunes and fates of the humans interface in interesting ways with those of the mice.

Did you know that mice dress only indoors, but are unclothed when they leave their homes? Reason? Easy. It’s simpler to escape detection when you are a brown flash, rather than a brightly clothed one!

Change may be hard for humans, but it is the same in the kingdom of mice as Helena learns from the aged and perceptive Aunt Fannie Fennimore who says everyone has two futures – the one you choose or the one that chooses you, which determine the course of life events.

Aunt Fannie, in urging Helena to accompany the Cranston family to London where both families, will find their futures, dismisses her with outstretched hands. Helena later discovers the meaning of the gesture as this wizened bewhiskered mouse wisely counsels the simplicity of holding on to your family. “You hold them with open hands so they are free to find futures of their own.” Good advice for mice and men!

Follow Helena and her siblings aboard ship as they follow the Cranstons and meet mouse royalty in the Dutchess of Cheddar Gorge, Nigel the smartest, jauntiest mouse steward aboard who promptly takes Lamont under his paw, the evil Nanny Pratt, (human of course) of the young sweets consuming Lord Sebastian of Clovelly, Lord Peter, Mouse Equerry and on and on.

Culminating at the Diamond Jubilee of Queen Victoria herself, both Upstairs/ Downstairs houses will find their futures if they have the courage to pursue them and the wisdom to know them when they appear.

Richard Peck’s winning novel will have you cheering for both man and rodent as the fates of both converge at a ball. Surprises abound with adventure and romance among mice and men never far away in Secrets at Sea. Please set sail on this voyage at once!