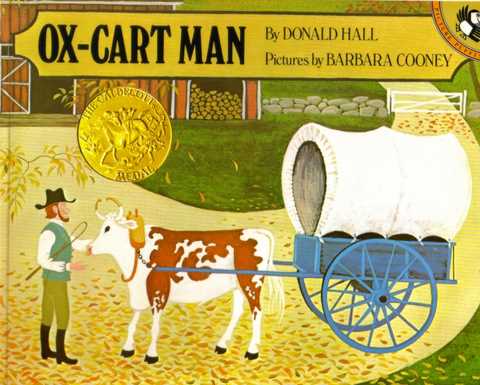 My Way Back Wednesday selection, “Ox-Cart Man”, portrays the cycle of the seasons of the agricultural year through the daily lives of a family fully invested in the land. It won the Caldecott Medal in 1980 as best picture book of that year. Here’s a quote from The New York Times Book Review that seemed to agree with the ALA’s choice.

again and again, for as pretty as it is it’s better than pretty;

it’s true in a way that moves children and grown-ups alike.”

It’s been called “beautiful and satisfying” by “Harper’s Magazine”. And that it is, for it provides the reader with a realistic window into the daily routines of farm life, sometimes hard and repetitive, but ultimately rewarding, as the family is able to sustain itself with its sale of the efforts of a year’s harvest. Nothing is wasted or taken for granted.

Spring is the time for planting, not harvesting, so Mr. Hall’s book opens with the results of a year’s labor: candles, linen woven from flax home grown, shingles split by the father, birch brooms carved with a kitchen knife (borrowed), potatoes dug from the garden, barrels of apples picked from the orchard, honey, and maple syrup from their own tapped trees. Even a bag of goose feathers taken from the barnyard geese are packed in the wagon the father will take to market.

Ten long days he will travel alone over many hills and valleys as he sees towns and villages pass by on his way to the goal of Portsmouth Market.

Initially we see him sell the goods of a year’s long labor, this thin, tall man with a red scarf wrapped several times about his neck. And gradually we come to the knowledge, in a most poignant way, that nothing is to be kept back from sale, including the cart itself and the beloved ox who is bidden good bye with a kiss on the nose!

What will he buy with the coins he has jingling in his pocket. Why practicalities of course and some luxuries that include two pounds of peppermint candies! His son who had to borrow the knife to carve the brooms will be the recipient of his own brand new Barlow knife to carve brooms for the next season. The women folk will he happy with embroidery needles and an iron kettle to hang over the fire. He will carry it all, stuffed in the kettle, slung over his shoulder on a stick. And he will set off for his long walk back home with no complaint. Hey, it’s the simple life folks, but not so simple when we look at it through the eyes of the conveniences of 2013!

In the frenzied consumerism of our culture, this is a book of satisfying simplicity. And in a culture that seems to thrive on possessions and the constant upgrading to newer, bigger, better, it’s well for young readers to have a window into a time when the entire family depended on the land, pitched in for survival and that survival was based on a “Waste not, want not” philosophy.

As the cycle continues towards the next year’s harvest, a young ox grows larger in the barn, dinners are enjoyed in the new kettle, needles are used for new stitching, planks are sawed for a new wagon and maple trees are tapped anew.

I love the final page as young geese drop their feathers in the spring. We know the cycle will continue for they will be collected, bagged and probably grace the interior of a featherbed. It’s a homespun scene and as near as we surely will ever get to the way our forbearers lived, depended upon and valued the land and what it provided. The book captures the activities and a way of life that was as natural as breathing to them, along with their concept of stewardship of the land itself.

Treat yourself and your young reader to “Ox-Cart Man”. “Tis a gift to be simple” and this Caldecott winner is a simply wonderful gift waiting to be opened.