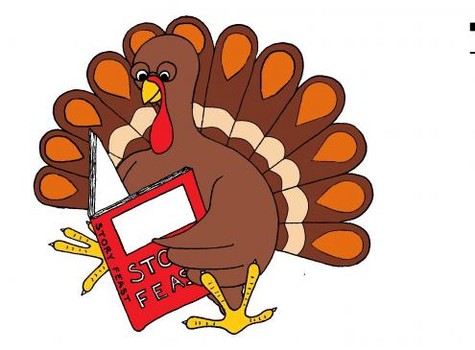 Celebrate Thanksgiving with a Picture Book And Not a Pocketbook

Thanksgiving Is a Time of Giving Thanks

Turkey Day is just around the corner and families are already making plans to gather.

Thanksgiving is a time of giving thanks for the many blessings we enjoy – our homes, our harvests and the time we spend with our families. In our current culture, that time seems increasingly to be disappearing with the rapidity of cranberry, turkey and stuffing off a Thanksgiving platter.

Many stores today are impinging on that ever closing window of family time, even on traditional family holidays such as Thanksgiving. They are opening on Thanksgiving Day itself to get a jump on the traditional kick-off of the holiday shopping season, termed by retailers as “Black Friday.” I often wondered why that particular term was adopted, but I guess it’s because retailers have a grand opportunity to get into “the black” or plus side of the profit ledger on THAT day, if they haven’t been all year. I am certainly NOT against retailers, profits by any means, nor a vigorous economy, but can we hold the cash register “ka ching” till AFTER the turkey has at least cooled?

Stores are starting to try and outdo themselves with earlier and earlier opening times on Thanksgiving Day. Macy’s may have been one of the first to kick it off following its grand daddy of all Thanksgiving Day Parades, with the air barely let out of those lofty balloons of Superman and Snoopy, than the doors of Macy’s swing open at 6pm, two hours earlier than last year, to shoppers jamming their store for bargains!

ToysRUs is opening at 5pm not to be outdone. Best Buy will open also at 6pm on Thanksgiving Day and here’s one I had to blink to believe was true. Kmart shoppers attention: IT will open at 8am! That’s right, they will open in the morning, in case you would like to pop the bird in and then get a little shopping done BEFORE the guests arrive.

Maybe I am sounding just a mite peevish over this, but sometimes BIG changes in a culture happen so gradually, we rarely take issue until it’s a done deal. All right maybe this might be an over reaction on my part, and people should have the right to shop when they want to, even at the cost of family time. BUT, those stores must be staffed with OTHER people that might not have had the option to work on a day they might have preferred to lie on the couch after the turkey, and be lulled with tryptophan from the bird – with a good book. Great idea! and here’s a thought: maybe that shopping time could be better spent reading to a captive audience of small children gathered, and now sated at the feast, that famous six stanza poem by Lydia Maria Child, “Over the River And Through the Wood”. Plus, here are a great selection of others to choose from:

The Night Before Thanksgiving – Natasha Wing

In Every Tiny Grain of Sand – Reeve Lindbergh

I Know An Old Lady Who Swallowed a Pie – Alison Jackson

And so, as Dickens’ Bob Cratchit intoned to his family on another holiday, “To the founder of the feast!”, and as far as I’m concerned, those founders would probably agree with me, and ask us to put off our shopping for just one more day!!