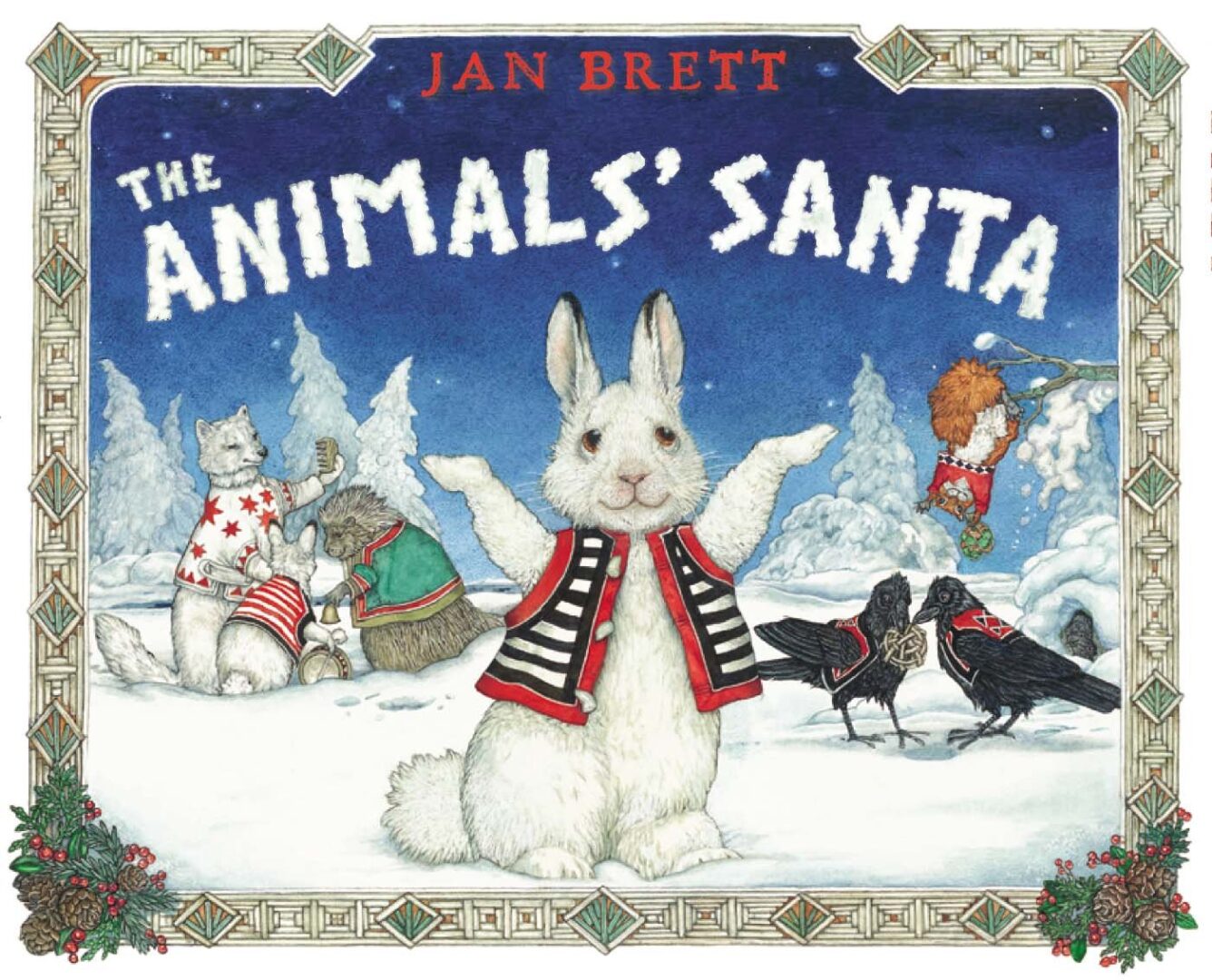 It Wouldn’t Be Christmas Without a New Jan Brett Picture Book!

It’s nearing Christmas in a winter white forest and the animals, like their human counterparts, are awaiting the arrival of St. Nick. In conversation, Big Snowshoe, the white hare, imparts to his brother, Little Snow, the tradition that all animals of the wintry wood know – the animals’ Santa comes on Christmas Eve!

But just Whooo IS this Santa? Just dropped a big clue, readers.

No one has EVER seen the jolly old elf, if elf he be, but one thing is surely known, the animals find plenty of evidence that he exists in the presents found on Christmas Day.

Each of the forest friends tell Little Snow the proof of the Animals’ Santa’s appearance in descriptions of the gifts found in years past. From the prickly porcupine’s hearing of a ding-dong, ding-dong accompanying the delivery of HIS Christmas bell, to the raven twins seeing a puzzle toy for this duo suspended from their tree branch, to the arctic fox’s gift of a brush to “fluff my beautiful tail, to the squirrels finding a sack of tasty nuts, evidence of the animals’ Santa presence via presents fills the forest!

Jan Brett has a tremendous talent to draw young readers into her picture books through delightful narratives year after year, but most especially in her artistry lovingly detailing each character in this winter wonderland of animals awaiting the arrival of this most famous giver of gifts.

Jan Brett’s bordered book artistic renderings are iconic. Here, they span the sides of each page with backgrounds formed of almost pale birch-like wood, festooned with small drawings of woodland family members. Amazing! Each of her books has a sense of its own identity and freshness that is distinctly Brett and NEVER boring.

Guesses abound as to exactly WHO in the forest may be the secret Santa! My favorite guess, though wrong, is the bedecked badger in snow shoes and trimmed Scandinavian coat, covering his fur.

Jan, how did you know that I’ve been looking for exactly this coat for years!

Other guesses include a Norwegian sweater clad polar bear, a gaily Christmas harnessed moose and an arctic fox complete with a cap and stitched leather and woven cloth saddle bags.

Little Snow is quite an ingenious hare and decides on a plan to discover the identity of the animals‘ Santa. Tying delicate sheets of ice with strands of hedge grass, he attaches them to tree branches. Why? In the stillness of a quiet winter night, they do not move, but when stirred by the wind of someone’s arrival, the ice chimes ring out and will herald the arrival of you know who!

It’s finally Christmas Eve.They ring and Little Snow dashes to find a neatly tied bundle of clover left for him and piles of other gifts have fallen from the sky from…. No, I can’t spoil the ending of this Christmas picture book’s bright, white and shiny ending by unmasking Santa. To find out his identity, do read Jan Brett’s “The Animals’ Santa” with your little ones. I can promise the revelation is amazing and this Santa DOES fly too!!