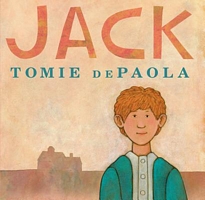 A Dream of a Better Life

Jack is on a journey – and the message is – so are we! That is what is so unbelievably appealing to me about the picture book. For our very young readers, it takes them on their very FIRST journey into reading with stories told in pictures and a chance to see what lies ahead for a lifetime of reading.

And who better to be their escort on these early journeys than the inimitable picture book author, Tomie de Paola? His picture books are legend and his awards in the arena of the picture book are legion. And here in ‘Jack” is a deceptively simple tale of a young boy living on a farm with his grandpa “way out in the country” who goes to the city to seek his future. But, as you may see it has a powerful message

According to Jack, HIS perfect future involves an opportunity to “see the world and make new friends and live in a house in the city?” Sounds doable, right? And it sounds like the dreams of thousands of young people today as they enter young adulthood. But Jack relies on Grandpa for a plan and a mentor at the journey’s end. Smart Jack! The wisdom of the older generation is a treasure just WAITING to be plumbed – and so many times – it isn’t!

Kings too, make great mentors, being “wise and generous men, says Grandpa. And off Jack goes – alone – but not for long. He is joined on his journey to the city by a very noisy and diverse group of tag alongs. After hearing Jack’s plans, they, too, want to come along for the ride er walk. In beautifully nuanced artistic succession, Jack takes on a veritable armada of animals, all added on after a simple Q and A of “Where are you going?” and “We’re going to the city to ask the king for a house.” Naive? Maybe. But in the words of a Rogers and Hammerstein song called, “ Happy Talk”, it affirms the truth that Jack knows. And that is “You gotta have a dream – If you don’t have a dream – How you gonna have a dream come true?”

Jack has a dream and it is shared by a quacking, squawking, barking, cheeping, mooing, oinking, croaking menagerie of add on dreamers. I forgot the ones that are the late comers like the ones that baa, neigh and hoot!

I had to chuckle when I read the answer the guard gives Jack at the palace when he asks for admittance. ‘Go right in.” says the guard. The parallel to modern “white houses” is pretty funny – or not.

Jack gets his audience with the king accompanied by his noisy companions where he is handed the “key” to a house that is a veritable fixer upper – but doable as the king expresses confidence in Jack’s abilities.

Some say, as Jack moves in, “There goes the neighborhood,” as people have mimicked for years, BUT, others chime in with – “And it’s about TIME.”

Tomie de Paola has created a beautiful metaphor for the shared dreams of generations of people that go to the city to pursue a dream. The city IS a melting pot of different tongues and talents. But the dream is the same – a better life. And the best part of realizing a dream is that along the way, you usually have, if you are lucky – a ton of tag along friends that buoy you up in your dream. They may be create a din at times, and they may be diverse – but they share your dream! They believe in you – and the dream.

And as Tomie so wisely imagines in his simple tale – if you are dogged and determined – you just may be handed the key to a very small kingdom called a house where dreams come true. For Jack, it’s a house, but for others today, it may just be a job. BUT, kids will intuit the message that whatever your dream is, it may be shared by many who are NOT like you. And, in the end, journeys are made to be shared – as well as dreams -and there is room for all! Well done, Tomie! It needs to be said again and again for each generation of dreamers.