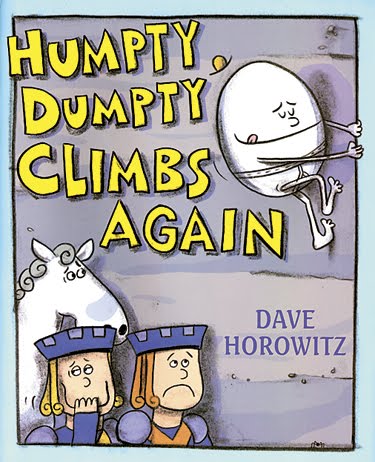 Egg On Poetry With David Horowitz!

Hey, it’s National Poetry Month and we parent/teachers have an opportune moment once again to awaken kids to the joys of poetry. Ah, right Liz!  And just how do I accomplish that herculean task amid all the others that make demands on my time?

Well, small steps for one, and why not start with a good egg named Humpty Dumpty? And what about using Mother Goose rhymes as the vehicle? We all remember those from our childhood, especially the accident-prone Humpty Dumpty.

Sat on a wall.

Had a great fall!

All the King’s horses

And all the King’s men,

Did you ever wonder what was the background lead up to this egg’s accident? Kids, naturally curious beings, are eager about the why and how of things. In other words, what “eggs-zactly” happened to Humpty? How did he get up onto the wall before his fall?

Enter David Horowitz who has come up with a plausible answer and lesson in modeling bounce back ability from fearful situations for eggs – and for kids in “Humpty Dumpty Climbs Again”. Seems the stalwart Humpty was a ROCK CLIMBER.

Following his fall and treatment by a doctor who warns him to be more careful, fear takes hold of poor Humpty. He endures the taunts of the King’s men as his “after the fall”, life begins to center on sitting in his house watching TV, munching chips and drinking soda.

Mr. Horowitz’s tongue-in-cheek treatment of the story is wittily wise and hilariously hits the story of this famous egg, afraid to climb again for fear of a repeat fall, on the head.

Other Mother Goose characters such as the Dish, the Spoon, and the little Dog (who laughs) from “Hey Diddle Diddle, The Cat and the Fiddle”, give comforting advice to bolster Humpty, “You used to be such a brave egg – everybody looked up to you.”  What an effortless pun from the Dish, high tailing it with the Spoon, after delivering such encouraging words!

As fortune would have it, the Spider from “Little Miss Muffet drops in and finally gets the housebound Humpty moving again as a good first step to confronting his fear. Your young readers will identify and empathize with the harried Humpty as he tries again.

Will Humpty heal? Will he overcome his fear of climbing? My money is on the egg!

Eggs don’t bounce back very often, as a rule, but this one does and is the perfect lead in to an introduction to Mother Goose and other rhyming poetry for small ones. Do I have to “egg” you on?