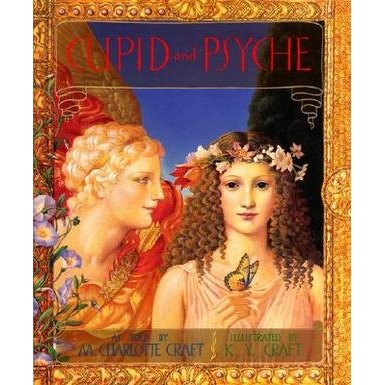 Falling in Love with Books on Valentine’s Day

As told by M. Charlotte Craft; illustrated by K.Y. Craft

Valentine’s Day is a perfect time to introduce your young reader to a Greek/Roman myth called Cupid and Psyche. Am I missing the logic here, you may be saying?  Isn’t Valentine’s Day about sending boxes of chocolate and flowers to the one whose heart you want to capture – AND sending them an anonymous card to keep them from discovering who you are? Yes, that is part of the allure of the day, but why not show your young reader, through a visually stunning book, the love god of myth that was the supposed instigator and explanation of how we FALL in love. He brought the mixture of stealth and falling in love to a whole new level. For Cupid, son of Venus, the Goddess of Love, is one of the most ancient of metaphors for love  and is the mythic god of love and attraction when aiming his love arrows at unsuspecting mortals!

Portrayed in art as early as the 4th century B.C., he is either depicted as a slim youth or chubby tot. Take your pick from the vast array of images of Cupid and his quiver of arrows that adorn Valentine cards and cuddly bears this February 14th. He’s everywhere and right here, in picture book form, in Cupid and Psyche.

In Ms. Craft’s sumptuous version of the famous myth, Cupid is portrayed as the utterly handsome and slim youth version. With a quiver of arrows, he is sent to punish the gorgeous Psyche who has enraged Cupid’ mom, Venus, goddess of beauty, for being a MORTAL who dares to be as beautiful as she. Oh, jealousy, thy name is Venus in this fantastic picture book. The gods and goddesses are a punishing lot when they fall into a snit! And so Cupid is tasked with stinging the beautiful Psyche with one of his arrows and then, the ultimate horror, she will be condemned to fall in love with someone of monstrous ugliness! Or, so says the Oracle at Delphi that Psyche consults as to what lies ahead for her.

But, Cupid, dutiful son that he is, in his zeal to follow mom’s orders, comes upon the sleeping Psyche and is accidently PRICKED by his own ARROW! Can you guess whom he is gaga over now? If you guessed Psyche, you get an A in Greek myth! Bet you never figured on that turnabout, Venus! Psyche may now be in the cards as your future daughter-in-law!

This is Ms. Craft’s first book and it is both lush and lovely as the story unfolds of the travails of true love between mortals and immortals. It includes Psyche’s simmering, jealous sisters who are as bad as those of poor Cinderella. They can’t STAND to see their sister happy. And there is predictable trouble afoot with these two!

Rather than harm Psyche, via his mom’s orders, Cupid secretes her in a lovely palace and surrounds her with every luxury, asking only that she never try to discover just who her host is. But that nagging prediction of the Oracle of Delphi, and the promptings of her sisters that she could be in the company of a MONSTER, cause her to tip toe in, under cover of night, to find her host is – the god, Cupid himself, fast asleep!  He is one mad immortal, when accidentally awakened, he finds Psyche bending over him with a knife!

To complicate this mythic soap opera, she accidentally pricks herself with Cupid’s arrow and is now head over heels for the god!! Yet now, he is madder than Midas that she did not listen to his orders not to seek out his identity. I can just see those sisters clicking their heels in glee. (Not shown in the book, but my imagination took over.) “Is it over”, kids will ask? Not quite. Psyche gets a reprieve of sorts.

I would be remiss if, in my review, I focused solely on the narrative and not Kinuku Craft’s exquisite paintings that allow the myth to unfold with clarity, color and classic art. Her paintings regularly appear on the covers of Time and Newsweek AND she has won two gold medals from The Society of Illustrators! Her painting of the scene where Psyche discovers who her host is fairly glows with an otherworldly shimmering, golden light emanating from the prone figure of Cupid. Spectacular! Every young reader should have the opportunity to see myths displayed with such artistic talent, showing the tenderness, trust and tumult of falling in love. Executed in each sumptuous painting in the book is the underlying mythic message that, even with a god, “The path of true love never does run smooth.”

I plan to give a copy of this book to MY Valentine along with chocolates and a card reading,  “I love you on Valentine’s Day and am so happy that our courtship had none of the complexity of this one, but did have the same happy ending.” Happy Valentine’s Day and watch out for Cupid’s arrows!