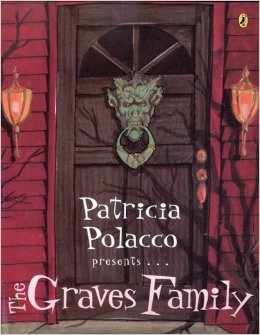 Patricia Polacco has written beautifully in her picture books about what it means to be an “outsider.”

Many of her books were based, it seems, on her hometown of Union City, Michigan.

And “The Graves Family” is no exception as there appears to be a real “Graves” house in Union City, and Ms. Polacco invites “visitors from all over the country to a Haunted House there every fall.”

The cover flap of “The Graves Family”  truncates the message of her book quite nicely when it suggests, “Don’t fear differences…celebrate them,” coupled with a quote tucked away that states:

“Those who march to a different

drum are in a magnificent band indeed!

And Ms. Polacco very nicely intersperses this message into her lively tale of the Graves family who move into “the creaky old house on the hill.” They don’t quite fit into the neighborhood. In fact they move in under cover of night. The Graves are, well, a mite different to say the least; some might even venture to offer the opinion, creepy different.

And so might young neighbors Seth and Sara Miller have said, had they not taken the time to get to know and befriend Hieronymus Graves, son of  Dr. Doug and Shalleaux Graves, scientist/inventor and gourmet cook, respectively.

Hieronymus, plus four carrot topped siblings named Billicent, Cintilla, Congolia and Tondileo are new to the neighborhood and getting the leery once-over from the locals who are loathe to get acquainted.  Great name choice for the kids, by the way.

The Miller kids easily nickname Hieronymus, Ronnie, and both find, through a series of adventures, that the Graves are quite the likable lot – and oddly interesting, too.

But, they are anything but run of the mill, as Dr. Doug Graves counts entomology or the study of insects as one of his hobbies, and spiders in particular.

And, as it turns out that very characteristic of “far from the everyday” turns to the Graves family’s advantage as it helps snatch triumph from the jaws of disaster with the arrival of the famous Christopher Joel.

Sent from the magazine, Ladies Lovely Home Companion, he also just happens to have “the most popular television show on home decorating.”

And the snooty matrons of the Union City Auxiliary Ladies Garden Club fairly salivate at the odd chance their house might be picked for his Fall Home Show.

Whatever could stand in the way? Young picture book readers can probably sense a plethora of potential pitfalls a page away. And they’d be right!

Will the Graves family ever win town acceptance, or dare they even hope, approval? Will their house make the grade in the contest, or will disaster ensue?

Patricia Polacco’s “The Graves Family” proves not only a fine and festive hauntingly lively Halloween read, but skillfully makes the point that it’s great to have flavors in life; be it food…or people.

And so much the better if they happen to be served at a Graves’ dinner table filled with:

Life, and dinner at the Graves house may not be everyone’s cup of tea, but it is uniquely their own and most certainly worth a try, which is Ms. Polacco’s very convincing, and hilariously hidden point.

Please pass those Indonesian Snarling Knishes au Gratin, if you please, and I’ll have seconds on the Octopus Knuckles from Tibet, thank you very much.

This is a picture book young readers will devour.

And here’s the perfect soundtrack to get you in the mood for a Haunted House!