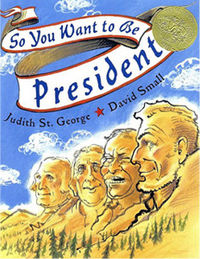 So You Want To Be President?

With the presidential election just weeks away and the debates next on the agenda, the revised and updated edition of this book available in time for the November 8th vote for the 46th President of the United States is just the ticket {no pun intended} to set the tone to engage your children in the political process about to unfold. The wonderful thing that kids will relate to the most is the human face it puts on the men who have held this most powerful office in the free world.

The book rightly won the Caldecott Medal for best picture book of 2000 and continues in 2016 to serve up a potpourri of comments, anecdotes, facts and facets concerning the men who have uttered those thirty-five historic words of the oath of office of the presidency. From George Washington to Barack Obama, these words have been a constant since colonial times. Isn’t that amazing?

execute the office of President of the United States,

and will, to the best of my ability, preserve, protect,

and defend the Constitution of the United States.

Perhaps every child, boy or girl, has at one time or another wondered what it would be like to sit in the Oval Office at that most famous address – 1600 Pennsylvania Avenue. Now kids can get a bird’s eye view of the men who have, sprinkled with many gentle pokes of fact-based humor alongside the more weighty, but all fascinating. You and your reader will no doubt enjoy reading these probably undiscovered small nuggets of knowledge from Ms. St George’s collection of factual foibles of the men who have held the highest office in the land.

I know that many others might in this matter as in

others, do better than I can. But…I am here. I must

do the best I can, and bear the responsibility of taking

the course of action I ought to take.

As St. George’s alternately funny, factual and flippant book reminds us – these are ordinary men at times who found themselves in extraordinary circumstances by virtue of their office and through spirit, stamina and service, willed themselves to do what they felt at the time was best for the country.

Interesting facts, both silly and serious emerge for kids about this exclusive club of executives. Six were named James, four Johns, four Williams, three Georges, two Andrews and two Franklins. Eight lived in log cabins. Pets are a plus with all types living at the White House though the favorite are dogs with Herbert Hoover having three named Piney, Snowflake and Tut. Teddy Roosevelt’s kids had all but a menagerie of assorted dogs, cats, guinea pigs, snakes, mice, rats, badgers, raccoons, parrots and a Shetland pony named Algonquin! He even rode the White House elevator!

The success of the book’s content is perfectly illustrated by the Caldecott Medal-winning artist, David Small, whose mischievous caricatures bring these presidents winningly alive to young readers. The individual anecdotes of the men are matched evenly preventing the book in any way from becoming a dry litany. It is indeed quite the opposite. Idiosyncratic behaviors are front and center with William Howard Taft ordering a bath four men could fit into!

Nine presidents didn’t go to college while some, like Thomas Jefferson who wrote the Declaration of Independence, were first-rate scholars. Presidents have been teachers, farmers, sailors, engineers, surveyors, mayors, governors, congressmen, senators and ambassadors. One was a movie actor, another was a tailor and a third owned a men’s shop. Please read the book to sort them out

After reading this book, kids will appreciate in retrospect the men who believed that we are a country built on the rule of law allowing us to rise above politics. As seen in the election of 2000, hanging and dimpled chads or ballot interpretations caused a country to hold its breath awaiting the outcome of an election.  And though it took time to resolve, it was an orderly transition of power from one party to the next.

The lesson kids will learn amid the quirky foibles of these 44 men is their devotion and courage is very much in evidence. Read the book and see if they still want the job! Psst… you have to be at least thirty-five years old. They’ve got lots of time to decide-and prepare. Good luck!