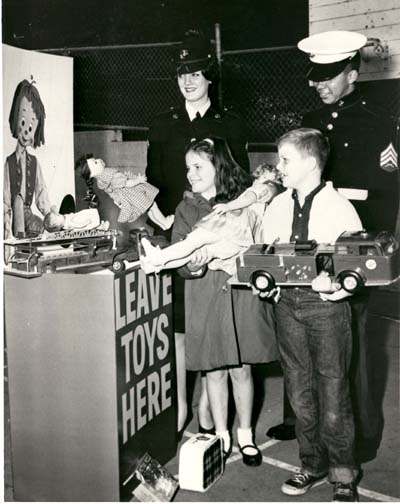 What happened to pretend?

When I read a recent article by author,  Naomi Schaefer Riley, on new toys for 2016  featured at the Toy Fair at the Javits Center in New York, this blog and, of course, accompanying picture books that it prompted, popped into my head.

Ms. Riley, aside from this article, by the way, has written in her recent books some very interesting observations about the current culture, and its effect on children growing up in it. I recommend them as a read.

The title of the blog “Toys for Tots” is a bit ironic in that it also happens to be the name for a notable foundation of the same name begun in 1947. It seems Marine reservist Major Bill Hendrick’s wife wanted to donate a homemade Raggedy Ann doll to a needy child, but could find no organization to help her. And the result was Toys for Tots.

It located bins outside Warner movie theaters and collected 5,000 toys! It was such a success that celebrity support came on board in the person of none other than Walt Disney himself who designed its early red toy train logo. If you look at the picture at the top, you’ll see some of the earliest toys that kids donated or received.

They were probably dolls, trucks, games and the like. Have toys changed that much as vehicles for pure imaginative play since 1947? They sure have.

Circling back to the 2016 Toy Fair, I wonder what Walt Disney and his team of imagineers would think of some of the featured toys at the Javits Center.

Imagination and play, which is the true work of “childhood,” is not high on the list in some of its featured “players”.

Take for instance the newer version of the time honored game of Monopoly. The cover letters jump off the box: Monopoly: Ultimate Banking; Own It All.

It’s been reinvented for the 21st century child. No longer do kids have the onerous task of counting out dollars. Kids now get an ATM card!

Seriously. It allows your child the supreme convenience of swiping their card to save the bother and learning the facility of a little computation and calculation of the 10% that the player owes the bank when mortgaging a property. Now, it allows then to “scan property cards and get the answer the easy way.” Sound familiar?

Did you know that American kids rank 27th in the world in math? Maybe it would make more sense to allow them the practice of counting instead of swiping.

Remember Barbie and her Dreamhouse? I have to be a bit truthful here. We were never a fan of the Barbie craze, nor were my girls. They were more into Strawberry Shortcake and her Berry Happy Home. That would have been, as I recall, a large  cottage with sweeping gables that my husband groaned and sweated over  constructing in the wee small hours of a Christmas Eve.

But the pretend play that emanated from the imaginings of “what if Strawberry Shortcake….were wonderful.

Barbie’s new house, unveiled at the Toy Fair on the other hand, is “Wi-Fi enabled, connects with an app and features voice recognition software, so kids can talk directly to the house….you make verbal requests such as telling the home to give Barbie a ride in the elevator, asking it to turn on the oven to get breakfast started  and getting the mood set for a party complete with flashing lights and spinning chandelier. Oh, I forgot, the stairs turn into a slide.

What happened to pretend?

Here’s something I found pretty stunning. A director of an Early Childhood program in New Jersey bought a set of colorful rings for her granddaughter. They actually came with a set of instructions!

What is the point of all this? Imaginative play is a natural and essential part of childhood.

In fact, as I paraphrased before, I believe it was the inimitable Fred Rogers of Mr. Roger’s Neighborhood who coined the phrase, “Play is really the work of childhood”.

Creativity comes out of the childhood world of imagined play and pretending. Not only does it provide a type of autonomy for endless possibilities in play, it is also a comforting place to be with a learning curve attached.

And, that same creativity, I believe, is also derived from reading picture books that depict characters and events that allow a child’s imagination to create its own scenarios wherein they are the driving force, not the toy manufacturer.

Toys and books that allow kids to innovate, imagine and pretend are the ones parents might want to think about purchasing to nourish the minds and hearts of children and grandchildren when they are young and formative.

I think probably many Baby Boomer grandparents are already pretty much on board with this kind of hands on creative play as Boomers are the generation of play things such as coloring books, (they are making a resurgence among those same adults as a …relaxation technique), paper dolls, scissors, pasting and cutting out, Tinker Toys, Lincoln Logs and Erector Sets, Silly Putty plus board games such as Candy Land, Chutes and Ladders, Parcheesi, and of course, the real Monopoly where you actually counted the money out and gave change.

It’s an interesting posit to wonder with each succeeding generation of toys that do everything for kids, such as the current version of Monopoly that short circuits the making of change and the counting process, is it too far a reach to assume that each generation of children then recedes further and further from using their imagination and insists on being entertained instead of doing the entertaining and imagining by themselves?

And, here are just some picture books that may be jumping off spots for featuring and modeling imaginative play while reading to, and with, a child:

King Jack and the Dragon – Peter Bently and Helen Oxenbury

Then, just step back, as you watch, listen and let them enjoy their own imaginative play that can produce and provide hours of entertainment for them. Toys don’t have to do the work of childhood.

Toys and picture books are just along for the ride as facilitators for kids’ own imaginative adventures that thrive when  allowed to kick start the imagination!

Wonder what kinds of toys and picture books George Lucas played with and read?

I’ll just bet they allowed him to do a heck of a lot of the heavy lifting when it came to the pleasure of imagining!

Just can’t imagine where all that led!