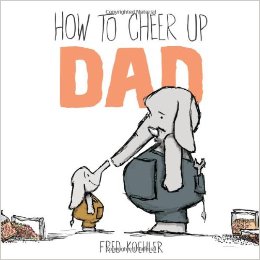 Happy Father’s Day from the Snuggery!

How to Cheer Up Dad

June is the month for Dads, grads and brides to be front and center. For all those dads out there who point out the overkill for Mother’s Day, lament their own second-class status and lack of attention on Father’s Day, here is one picture book that tries to set it all right!

Little Jumbo, a small pachyderm, notices his dad is having an off day. But isn’t it odd that right from the start, dad starts off with HIS BAD day as Little Jumbo’s is just humming along. Hmm. Cheer up dad; it’s one on one time with your son! And as Little Jumbo starts his observations of dad by taking his emotional temperature, he fails to notice that the downturn in the “glad factor” in dad’s humor lessens by half immediately after breakfast. Might the downturn have something to do with the cutie Little Jumbo shooting the raisins his dad has lovingly provided on Jumbo’s cereal and aiming them in a fully loaded trunk, onto the CEILING?

Bath time for Little Jumbo results in a parade of raisins trailing through tousled towels on the floor. And guess what? This small pachyderm hates overalls post bath, so he turns into a little neighborhood “streaker” with his dad in full pursuit. Ah, the appearance of the unexpected in one’s progeny takes parental pachyderm patience to new levels here.

Things mood-wise are reaching critical mass as Little Jumbo suggests DAD needs a time out, perhaps? Wrong tack, small elephant child, as any small reader could advise that YOU will be the one with the time out!

What to do? How can one small elephant cheer up his dad? Why naturally enough, start with the simple things; they usually work best! And a hug starts things off on the RIGHT foot, followed closely by a catch with dad. Things ARE improving! Ice cream cones followed up with fishing is a great way to make dad feel needed –and JUST MIGHT make Little Jumbo a tad happier too! And what better way to bring the energy level down after a tough day than a snuggle and a book, followed by the role reversal of Little Jumbo tucking a tuckered out dad into bed.

Hey, Little Jumbo has this cheering up dad thing down cold. That is until the new day dawns with a whole new set of ways to relax dad needing to be devised by Little Jumbo, who is at it again with ways to unrelax him. Twas ever thus!

Fred Koehler’s debut book is just in time for Father’s Day. And every dad can surely identify with young ones who are eager to help you “ree-lax”, but are oblivious to the reasons why you need to. Kids and pachyderms – Ya gotta love’em!