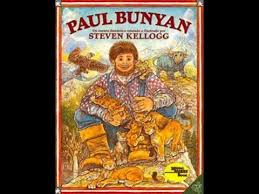 retold and illustrated by Stephen Kellogg

Hey, readers, did you know that June 28th is Paul Bunyan Day? Neither did I, that is until picture author, Tomie de Paola, reminded me today, via a gorgeous art-mail. Thank you, Tomie!

And it’s gonna be a hot one, so perhaps there might just be some time today to cool off for young ones with time that includes a lap and a book.

Sometimes, in the flurry of picture books out there, the folk, fairy and fables might get slighted a tad.

So… enter Stephen Kellogg with a collection of folk tales to whet the appetite for larger than life heroes.

Seems our culture today could do with a bit of hero modeling for our young ones as today’s heroes tend to be rock stars and sports figures, with its inference that mere celebrity is good enough to pass for true achievement.

I’m always interested in seeing how folk tales or “tall tales” sort of explain to young readers, in a most charming way, the natural world and how it evolved.

Was there truly a Paul Bunyan, or are his exploits stretching the truth from Maine to Alaska?

In researching this, according to some information derived from the History Channel, I discovered that some historians believe that Paul Bunyan was based on a real person named Fabian Fournier, a French-Canadian lumberjack. He moved south and got a job as a logging foreman in a logging crew after the Civil War.

Even if folk tales stretch and spin the truth to tell a story, Stephen Kellogg has rendered young readers a “huge” service in retelling this tall tale of Paul Bunyan, that very large folk hero, and a woven together series of yarns of a giant, yet gentle man, putting down his pretty big footprint in the wilderness!

Everything about Paul is BIG, from his birth as the “largest, smartest, and strongest baby ever born in the state of Maine” and his early interest in the family logging business. Kids will be goggle eyed at this “diapered dynamo” literally hauling whole trees out of the ground, single-handedly!

And Paul’s parents are literally forced to anchor his ginormous cradle in the harbor, as the complaints mount of his exploits. But, as Paul rocks, so too, do waves that mount perilously in the harbor. And the Bunyan family quickly decamps to the wilderness!

Kellogg has illustrated to perfection the simple text of “All was well until Paul started rocking the cradle and stirring up waves.”  Boats and houses awash from Paul’s wave making are illustrated to hilarious effect.

As the Bunyan family head west, kids will particularly love his adoption of Babe, the “blue ox”, that Paul rescues from a snowdrift. Why, you may ask, is Babe a true blue ox?

“Both Paul and Babe began growing

at an astonishing rate, but the ox never

lost the color of the snow from which

And, in those Appalachian Mountains, beware a pack of underground ogres called the Gumberoos that attack Paul’s logging camp. All I can say is….feel sorry for those pesky Gumberoos!!! There is quite a rollicking rumpus of a rowdydow; in plain English; a whale of a fisticuffs fight.

Kids will marvel at Paul’s clearing of the “heavily forested” mid west and the huge flapjack griddle constructed to feed his busy crew. Kitchen helpers skating on slabs of bacon “laced to their feet” like ice skates is imagined by Kellogg as broom hockey on a griddle with an orange as the puck. That scene is wild and wonderfully imagined by the author.

I could go on, but that would deprive you of Kellogg’s compilation of the “tale tales” involved in Paul’s  reaching California and then on to his new adventures in Alaska.

Bet you wonder just how the Grand Canyon was formed. Maybe, as this Reading Rainbow selected picture book intimates, it was something like:

gouging a trench, which today is known

as the Grand Canyon.”

Glory be and fiddle dee dee! Paul Bunyan and his tale tales are a grand read, and Stephen Kellogg’s take is just the book to introduce your young reader to this “mountain of a man.”

Happy Paul Bunyan Day…and he’s got you, too, Babe!