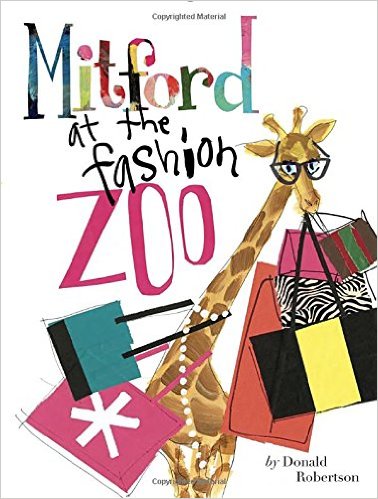 Mitford at the Fashion Zoo

Think of the movie, “The Devil Wears Prada”, with a long-necked giraffe named Mitford as an animal hire on to the fashion police at “Runway” or “Vogue”; here named “Cover.” And it’s a bit of a funny, picture book parody.

New York is awash with animals that love to dress up. Hmm.

The star fashion editor named Panda Summers needs an assistant ASAP, as Fashion Zoo Week is descending with a frenetic frenzy, phones ringing off the hook, and a former assistant that ran “howling” from the building.

And folks, it’s howlingly funny that the termagant head of the company’s HR department is anthropomorphized into a gray mouse, the size of a well, mouse, and the infamous Panda Summers wears ubiquitous dark glasses and a banged filled page boy do. This seems very familiar. Does this Panda Summers ever smile? She has a permanent downturn to her panda face. Doesn’t she know it may cause wrinkles?

521 candidates for the thankless role of assistant to the fashion dictator have been interviewed with no success.

Finally, the “Mitford file” makes its way to the black-gloved paws of Panda Summers.  The long-necked Mitford has dreamt of this momentous moment since she was a small calf! Everyone has dreams, right?

Formerly dismissed to fashion bogey land by Ace Salmon, “Cover’s” Creative Director, at a previous interview because of a sneeze induced attack, Mitford’s fashion career may yet be on the rise. The sneeze was sadly brought on by a poor choice of headgear because Mitford opted for a fashionable feathered headdress. Sigh!

But wait!!! Mitford gets another chance to interview with the Panda of pandas.

A ONE-WEEK TRIAL ensues. Will Mitford make the grade?

Will she collapse under the pressure of these high fashion fashionistas?

With names like Zap Possum calling frantically before New York’s Fashion Week Zoo with balloon-like dress problems and their transport, will Mitford survive the trial by tent dress?

Small fashionistas will knowingly nod as they recognize the close-to-familiar names of Shark Jacobs and Mikael Boars that look to Panda, and ultimately, the innocent and unhardened Mitford, for solutions to Fashion Week disasters.

Through a series of true fashion accidents, Mitford’s stock soars.

At Fashion Week’s close, Mitford elicits Panda’s ultimate phrase of praise – “It’s BEYOND”, as she is permanently, and finally, hired to walk the halls with these legends of fashion legerdemain.

This book, and its picture book long walk down the fashion runway, is a hoot with the art and story hitting their mark of the sometime absurdity of fashion dictates.

Its author, Donald Robertson, is himself a creative director in the fashion industry, and hopefully he ran it past his fellow fashion fashioners, as it delightfully hits the mark.

It is filled with a truthful touch of just the right amount concerning fashion absurdity.

Kids will love the silliness about its oh so serious take on these animals that take their fashion designs to new heights of gravitas.