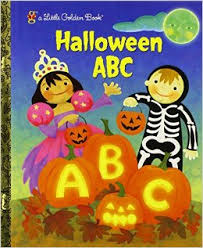 “It’s Halloween Night. The moon is out. The pumpkins are aglow.”

Here come those Little Golden Books that mom, dad and grandparents remember from the days when they sold for a mere 25¢. These original eight wonderful stories and beautifully illustrated and inexpensive children’s books made books accessible to generations of eager readers. Unfortunately, the price has upped from 25¢ like everything else, to around $4.99, but that’s still a fair price in the children’s picture book market.
Did you know that from their early beginnings, when there were only eight of these wonderful books, they were illustrated by artists such as Garth Williams, Eloise Wilkin and Richard Scarry who went on to picture book fame?
From the original eight that included “Tootle” “Scuffy the Tugboat,” “The Little Red Hen,” and, of course, the famous “The Poky Little Puppy”, which is supposedly the top-selling children’s book of all time, there are now more than 200 titles.
And, here, in Little Golden Book’s Halloween ABC, the youngest of little ones can hear a Halloween story that integrates ABC learning featuring costumed kids going from house to house on the spookiest night of the year.
There’s a cute angel dressed to illustrate the letter A and a cranky cowboy for C, because he has to wear a coat over his costume.
Boy, would my now-grown girls relate to the cranky cowboy. Every parent is usually negotiating with their trick or treaters the feat of how to keep them warm, without disturbing the glory of the costume that you and they, have spent weeks planning!
Cute dinosaurs visit a dentist, illustrating D as he gives out floss instead of candy; Maybe not a popular stop, but very practical.
What would the letter H be if not for a Haunted House?
There’s even a Halloween party where the trick or treaters dig in and the dressed up O for octopus is over stuffed and a grandly garbed queen is queasy.
As Halloween winds down, Dad “unbuckles the umpire” for the letter U, before he tumbles into bed. And a marching band member named Xavier, plays his xylophone to a sleepy yak.
And as for the letter Z, they literally fill the air above the night sky as Halloween comes to a close and all is quiet except for a plethora of ZZZZZZ’s, denoting a neighborhood asleep after a day full of fun.
It’s a great Halloween Little Golden Book read aloud perfect to wind down the energy after your trick or treaters put PJs on, and you and they look back over another fun-filled Halloween.