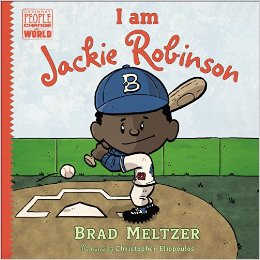 I Am Jackie Robinson

Brad Meltzer’s picture book from the series entitled, “Ordinary People Change the World” is a “hit out of the park” on both counts!

Chronicling the amazing journey of an incredibly talented and courageous African American baseball player named Jackie Robinson, this picture book enables a new crop of picture book readers a window into a world with a very different baseball roster than the one they see now.

Incredibly, at one time, there were NO African American players in Major League baseball!

C C Sabathia, Jason Heyward, Dominic Brown, Ryan Howard and B.J. Upton are but five players today that stand metaphorically on the shoulders of Jackie Robinson. And, I think many of them know this. In fact, there is a link at the bottom of this post to interviews with some of these players, as regards to Jackie Robinson.

Today, there are many players of race that stand on the shoulders of the courage, conviction and calm of Jackie Robinson as he broke the so-called “color line” in Major League Baseball.

I have always believed that “Example is the strongest teacher.” In the end, it is not so much what we say, but the values we hold, and how those values define our lives, that our character is formed. Never was that more true than today. Never was it more important for young readers to have picture books like this one in their hands.

And that is why a book like “I Am Jackie Robinson” is a great picture book read this month OR any other. It arranges the arc of Jackie’s life, and the experiences, example and ethos that drove it.

Perseverance, courage, determination, fearlessness and an incredible talent that could not be denied, are but a small semblance of the values and attitudes that formed Jackie Robinson.

Brad Meltzer’s picture book allows your reader a very vital and vibrant glimpse into a far different world than the one they are growing up in. Some injustices never change fast enough. They are part of the fabric of a nation for a very long time.

For Jackie it was a long road to change – but one he travelled alone, and with a quiet strength. He let his talent do the talking. And it commanded respect – eventually.

In baseball, it took the impetus provided by a manager named Branch Rickey, President of the then Brooklyn Dodgers to hire an all but unknown player named Jackie Robinson.

Athletic abilities, at that time, unlike today, had little to do with being hired by a Major League Baseball team – if you were a man of color.

Jackie, born the youngest of five children was named after the “Rough Rider” hero and President, Theodore Roosevelt. He was named Jackie Theodore Robinson. Quite a name to live up to – and he did!

Bravery was something that did not come immediately to Jackie. But, at the age of eight, he found his voice when a young girl called him a name – AND the girl’s father got into the fray. A fight began – yet that is never a solution; at least not a rock fight!

Told in the first person, sports and winning were what fueled Jackie’s passion for achievement. And it was here, at least initially, where the color of his skin did not wholly define him.

But it’s a huge leap from the sandlot to the floodlights of a Major League Baseball field.

Living in a mixed neighborhood, his mother gave Jackie a phrase that would carry him through many an angry confrontation on the field – “When you do something good, it brings out the good in others.”

At UCLA he was the first student EVER to win letter in four sports – football, baseball, basketball and track.

Then the call came – from Branch Rickey.

Jackie had guts and what we used to call “gumption”, as he embarked on being a historic first in the world of professional baseball. He did it with grace, style and a first home run of 340 feet! Scoring and stealing home became his trademarks with a professionalism that stood the test of racial epithets.

It’s hard to go first in any field against opposition, but it IS essential to lead by example. Jackie Robinson did both.

So as Spring Training starts, and African American History Month closes out for 2015, it’s batter up for this great picture book called, “I Am Jackie Robinson.” It’s both a “hit out of the park” for Jackie, and for your young reader.

Jackie Robinson defined what is possible if one has the talent, timing, technique and tenacity to reach a goal. It can be done!