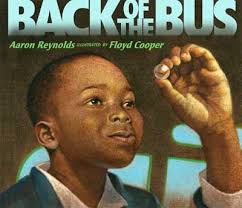 Do Meetings of Certain People Change the Social Fabric of Society for Good? With Martin Luther King and Rosa Parks, the Answer is Yes!

Back of the Bus

December 1, 1955 to December 1, 2022 is a long time; in fact it is 67 years to be exact. This is the date when Rosa Parks defied the Montgomery, Alabama city code that required them to not only sit in a separate section of the city buses, but to give up their seats if white passengers boarding, could not find seating in the all white section!

Young readers need to be reminded how life was for many of our citizens in the not too distant past. And that is what “Back of the Bus” helps to achieve in telling the Rosa Parks event through the eyes of a fictional black child and his mother seated on the bus that day.

To set the scene, just a bit of back ground history concerning what happened prior to December, 1955 when Rosa Parks was arrested for refusing to cede her seat on a public bus.

She had met Martin Luther King in August of that year. In Martin Luther King’s memoirs he had these things to say of Rosa Parks… “Mrs. Parks was ideal for the role assigned to her by history” and…”Her character was impeccable and her dedication deeply-rooted,” plus, as King also observed, “Ms. Parks was one of the most respected people in the Negro community.”

What followed her arrest was the onset of what came to be known as the Montgomery Bus Boycott that lasted some thirteen months! It culminated with nothing less than a United States Supreme Court ruling that said segregation on public buses is unconstitutional.

Aaron Reynolds fills his book with small events to portray the small boy as just a child riding the bus with his mom as an everyday event in his life; a day just like any other except it turned out to be a defining moment in history he chances upon.

He takes out his bright, shiny marble; a tiger’s eye, and rolls it. As the bus slows, it follows the law of gravity away from him and rolls right into the hand of Rosa Parks, who rolls it back with a grin. More passengers get on.

Then it happens. Mr. Blake, the driver growls out, “Y’all gotta move, now.” Some people do get up and move, but the bus is at a dead standstill. Somebody is speaking up. But the words of the bus driver carry to the back of the bus, “I’m gonna call the police, now.”

Whispers fill the halted bus and the boy can see from his perch at the back of the bus that the speaker was Rosa Parks:

and them folks know it.

But she’s sittin’ right there,

And I start thinkin’ maybe she does too.

Words may be instructive as we parents know, but I still think example is the strongest teacher. And in Ms. Parks’ case, her subsequent arrest and fine because of the violation of Montgomery’s city code was a watershed event.

The boy’s mother placates him with the words, “Tomorrow all this’ll be forgot.” Though his mother says the words, he too takes note of the new “lightning” storm” in her eyes. And, instead of feeling afraid, he feels a new strength.

Taking out his tiger’s eye marble from the tightly closed fist, instead he holds it up to the light with a new pride. I love the illustrations that seem a bit out of focus and muted until Rosa Parks takes her stand. The defining lines and shapes seem dim with everything hazy and unclear, including the people on the bus.

Mr. Cooper’s artistic technique changes with Ms. Parks’ refusal. Images are sharp and clear. People, including the young boy’s mother are drawn with clear and delineated thoughtful feelings of emotion at what has happened. Art and narrative blend beautifully to display the change that is afoot.

Where does Martin Luther King’s life intersect with Rosa Parks?

Following this event, the Mt. Zion Church of Montgomery spurs the formation of the Montgomery Improvement Association, lead by Martin Luther King. Their initial goal is to effect change starting with the very segregation bus code effecting Ms. Parks. The MIA organizes a very successful boycott of the buses for 382 days with some 40,000 black riders cobbling together alternate means of transportation to get to work. They included walking, carpooling, riding in African-American operated cabs. Martin Luther King’s home was attacked in the ensuing violence the boycott began.

Rosa Parks single act of defiance with the words, “I don’t think I should have to stand up,” was the catalyst for change. Books and the ideas they foster have done the same thing for people with each turn of the page. And for your young readers, “Back of the Bus” may not only provide a look back in history at a single and seminal act of defiance that changed an unjust law, but a model for a way to stand up for something they believe in when the still, small voice in each of us tells us to do so.

To a small boy sitting on the sidelines of history, it must have shown the ripple effect of one act, and further, to a nation, it signaled a clear and uncompromising note that non-violent massive protest could be used as a catalyst for confronting racial segregation in the social fabric of a country that at its outset, was forged on higher principles.

Let your young reader have a seat in this picture book, right alongside a young boy, where they both can have a window seat on history in the making.