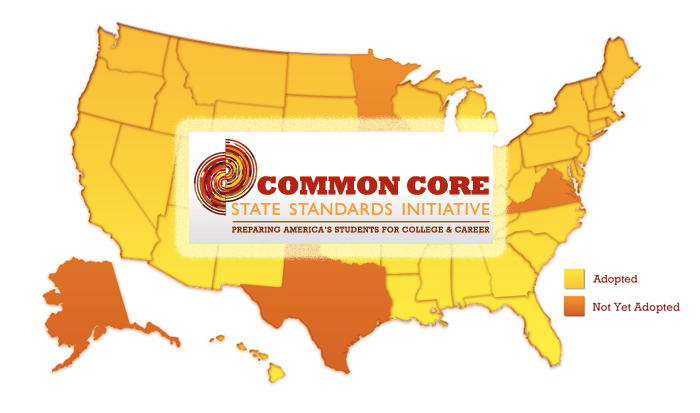 One Opinion on the Common Core State Standards

Common Core and the Picture Book

If you have school age children, I’m pretty sure you’ve been reading up on, or heard of, something called Common Core. It’s stirred up quite a rowdydow in the education community. And some parents, as eager partners in the learning content of their children’s educations are, to say the least, eyeing it warily. They’ve seen test scores from the initial round of tougher content testing. And many parents are perplexed. What happened? Why did scores drop? Is there too much emphasis in schools on teaching to the test? Not enough?

The pressure is on for school systems to make these new and tougher national norms in Language Arts and Math uniform in those states that have bought into Common Core State Standards testing and what does that mean for children just starting school in Kindergarten? It seems to mean less time for play that is also an important part of the learning process in younger children.

Parents make ask why these two subject areas? The reasoning seems to be that these are the skills that are used in other subject areas.  By the way, not ALL states are participating in the new Common Core standards that seem to be holding teachers accountable for more rigorous content.

But teachers are but a part of the equation in learning for your young child. Who ultimately, then, determines WHAT your child learns and WHY? National norms do seem to be the future!  But, it’s dizzying for teachers AND parents to say the least!

Question: What will it BE like and how do you PREPARE the next generation of children for the 21st century job market?

It’s sort of an unspoken fact that large numbers of students have been entering American colleges for years only to find they are not up to the demands of college curricula and thus have to take remediation courses in English and Math to help them cope with the skill sets necessary for college level work!

Added to the complexity of the general educational discussion of late are the laments many parents mutter about their children’s lack of what we used to refer to as “foundational skills”. They’re perhaps the meat and potatoes the “Baby Boomers” grew up with, for instance, the so-called basic math functions like addition, subtraction, multiplication and division. And, in some instances, technology has been both bane AND blessing in that regard.

Question: How many children today know the basic times tables? Do they need to? Memorization and rote are definitely kaput in many areas. To the naysayers of memorization, the answer may be a calculator can figure it out. But what if you don’t have one or you forgot it? What then?

The teaching of grammar, spelling and punctuation, some say, is a fading relic and unnecessary as that particular function can be performed by programs such as Spell Check. It will take care of all that unnecessary knowledge. But, does Spell Check, for instance, know the difference, when you incorrectly use “H A R E” for “H A I R”, even if it seems to make sense in the context of the sentence? And what if you don’t happen to own a computer, and have to, dare I say it, write the composition in LONGHAND! By the way, what did happen to the teaching of “cursive writing”? We have generations of kids that don’t know how to write LONG HAND. They can only PRINT and I’m talking high school here. I’m not anti-technology, but if you can’t WRITE cursively, how do you READ it? How do you SIGN your name? Hmm. It would sort of be akin to asking a modern Catholic priest to say a mass in LATIN. It’s not taught in seminaries anymore so he wouldn’t know how.

Back to Common Core and ultimately to the picture books. It seems that “backward-engineered standards” as Mr. King states, were specifically formulated as a way of graduates reaching skills determined by the 21st century job market and ensuring that the rigor demanded of that market is met by the time they graduate high school. Sounds good. IF, and that’s a big IF, they are AN ADJUNCT to foundational skills that have ALREADY seem to have eroded and been watered down for a generation of learners today.

Answer: Start them reading, early and often. Yes, STEM (that is science, technology, engineering and math) courses are an important component of this new emphasis in learning. In fact, you will start to see academy level learning springing up within high schools soon in this regard.

But reading for pleasure, for lessening stress, and to encourage the development of the imagination is also a critical part of a child’s education for both elementary AND secondary schools.

And it all starts with the PICTURE BOOK. Just a few of its strong and positive indicators for academic growth in your child are it fosters the growth of the attention span necessary for reading. It increases your child’s exposure to an opportunity for reading comprehension via Q and A on content and provides vocabulary growth, not to mention preparation for the chapter book and beyond. And the clincher is, it’s the portal for companionship, pleasure and education for a lifetime, Common Core or no.

So, I guess my suggestion is YES!  Do read all you can on the new Common Core State Standards and determine what YOU think about it, but the best advice in the meanwhile, for what it’s worth, is a VERY old chestnut. YOU are your child’s primary advocate and educator, so read TO them and WITH them each and every day from a variety of classic and not-so-classic literature in picture books. The picture book has been around long BEFORE Common Core and, I dare say, will survive it!!!