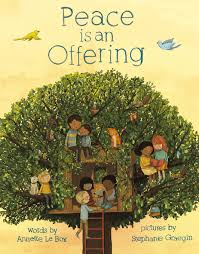 What does peace mean for our children?

Peace is an Offering

It seems more than ironic that I am writing this post of a picture book on peace, on the day after Memorial Day, originally termed Decoration Day.

Decoration Day, instituted following the Civil War by General John A. Logan, was begun on May 30,1868 to honor the war dead from both sides of the conflict. Flowers  “decorated” the graves of those who died “in defense of their country during the late rebellion.”

On the first Decoration Day, May 25, 1868, more than 20,000 Union and Confederate graves were decorated at Arlington National Cemetery by over 5,000 participants. And if we’re really being precise, the decorating of graves of the Civil War dead even predates 1868, as it first began in the South where black communities in Charleston, South Carolina, around 1865, honored the Civil War soldiers that died, and their ultimate sacrifice.

Before reading Annette LeBox’s picture book, “Peace is An Offering”, I took a look at the number of soldiers who have died from all wars and military conflicts that the United States military has been engaged in, in some form or another. The numbers are pretty staggering.

And yet.. I feel even as we read books on peace to young readers, we need to impart to them, some other facts and values. And those are, that there are some values, such as family and freedom, that are very much worth protecting, and even defending.

Gala Truist, a medical anthropologist, and contributor to the Library of Congress History Project, talked with recent veterans in conflicts in Iraq and Afghanistan. And she has some pretty interesting observations:

people, 1.3 million Americans are in

active duty military, and another 1 million

serve in the reserves, according to the

lic thinks about the cost of conflict.

Now, less than 1% of our population has

served…So few have served, and that

it’s very easy for people to say now that

“I didn’t want these wars”, but that

doesn’t mean that we aren’t all part of

And, as we as a nation pray, teach and hope for peace, the reality is that only a very small percentage of Americans have, not to put too fine a point on it, “skin in the game,” because of an all volunteer military and the elimination of the draft.

I often wonder what the effect would be in this country if the draft were re-instituted and, as a result, the military draft cut across all lines.

Would families still allow sons and daughters that are drafted to defend and serve? Or would they consider the sacrifice too great? It’s a question worth pondering.

Annette Le Box, in her picture book, travels through a neighborhood of everyday children enjoying everyday things. It’s filled with pictures of sun filled days, and softly shaded nights; of young ones and their families and friends, sharing the day to day joys of childhood. And it touches gently on the sometimes subtle and unsettling conflicts that may sometimes arise. Stephanie Gregins’s pictures provide a wonderful complement to the picture book in their softness and simplicity.

The inference is that peace is something that may be sought and found in our every day interactions with the people that come our way. And that is a truly wonderful message to impart to young readers.

But, I also hope that as parents read “Peace is An Offering” to their young readers, they also remind them that peace, on a world wide scale, often does come at a price, and that it is preserved, as it has been in the past, by many that are very deserving of their thanks and prayers.

Maybe then Memorial Day may continue to mean, for their generation, so much more than beaches, barbecues and bargains.