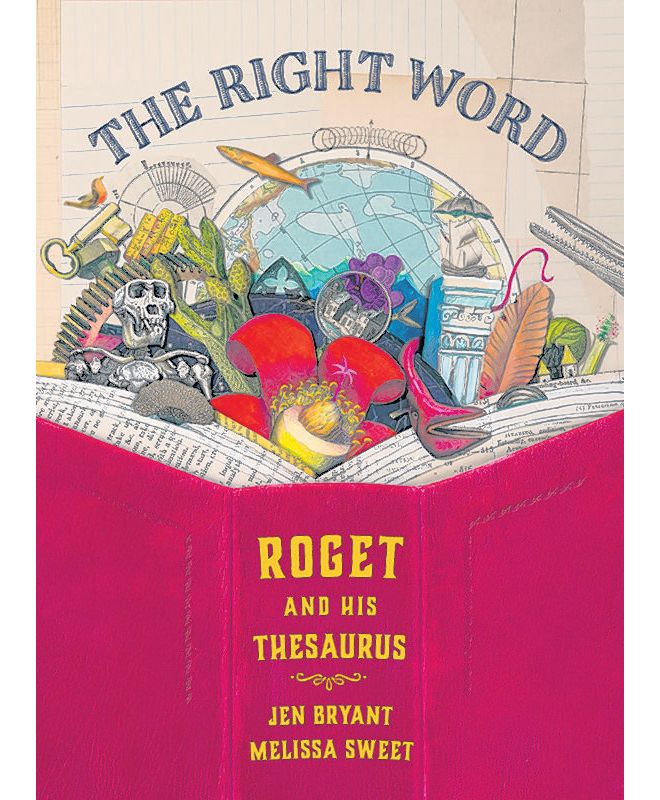 The Perfect Book for a Budding Writer

The Right Word: Roget and His Thesaurus

Here’s a line from J.M. Barrie in his Peter Pan tongue in cheek description of the bane of children everywhere; the pirate, Captain Hook:

“The man is not wholly evil – He has a Thesaurus in his cabin.”

Okay, so he’s a literate pirate with a taste for words. I’ll give him that much.

For any budding small authors you may know, they may gain much encouragement from the telling of Peter Roget’s life who began his first book at age eight, calling it: Peter. Mark. Roget. His Book.

Here is a picture book that may intrigue many young readers – and parents as well, for the authors have won a well deserved Caldecott Honor Book Award and The Robert Sibert Medal given for its freshness and ability to make the complex available to young minds. Called “a wonder, a marvel, a surprise” of a book, it was awarded the Sibert Medal in 2015 as “the most distinguished informational book published in English in the preceding year.”

Making Roget’s life available to the youngest readers is no mean task, for he started by fashioning lists of Latin words with their meanings written next to the word.

Melissa Sweet has illustrated his initial lists with a charming, and childlike simplicity in mixed media, that brings the word, its meaning and accompanying picture, alive to the reader.

To illustrate the look of his lists, even some of Ms. Bryant’s text is written in rows as in:

Just who was Peter Mark Roget, born in 1779, that compiled plethoras of lists from a very early age?

Well, moving often at a very early age made it difficult for young Peter to form friendships. But he did find fast ones – in books!  And those books had plenty of words!

And science books by the Swedish scientist, Linnaeus, were a particular  favorite of the teenage Peter. Linnaeus made lists as Peter did. Peter wandered through London parks compiling lists of all plants and insects.

His mother had just a smidgen, of “worry” over all these lists and wanderings of Peter’s.  But was “worry” the right word? Why not fret, badger, annoy, plague, provoke or even harass? The choices were endless.

Finding the right word was wonderful!

But what if there were a book, Peter imagined, “one book where one could find the best word that really fit.”

Medical school in Edinburgh, Scotland, followed, working later among the factory poor in London, and always, the lists were his passion.

He was soon lecturing and inventing everything from portable chess sets to a new math tool.

In 1852, he published his “Thesaurus” from a Greek word meaning “treasure house” and quickly sold 1000 copies.

And today, thanks to this young list maker, EVERYONE has the ability to find just the right word and its meaning.

And it has remained in continuous print to this day!

A Listing of Principal Events at the end of the book, gives a timeline of his other achievements, as well as what was happening concurrently in similar fields of study.

How’s this for fascinating? In 1824, after casually observing the spokes on the wheel of a passing carriage that appear to bend when seen through vertical window blinds, Roget wrote a scientific paper on optical illusion. And THAT is considered to be one of the founding underpinnings of modern cinematography.

Who knew, realized, perceived, sensed, recognized, or noticed any of this? Not I.

I will now; every time I reach for my Thesaurus!