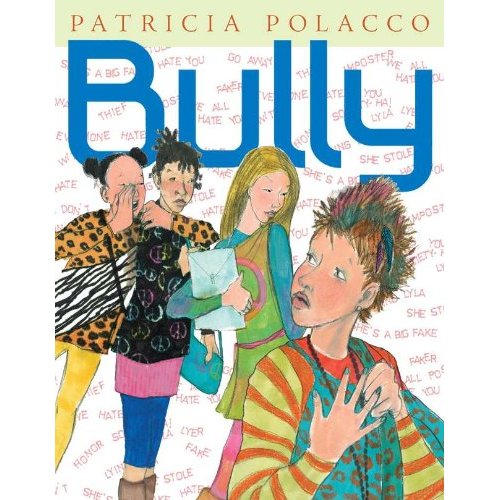 The New Phase of Bullying

I’d like to piggyback this newest title from Ms. Polacco entitled Bully to my last blog entry (posted on August 22nd), also by the same author. That title is called Thank you Mr. Falker. They’re sort of book ends that address a similar problem in school seen from different grade levels precipitated by different catalysts. But the end result in both is the same and both address the issue of bullying. I think Bully is a very timely and important picture book. I hope you may consider sharing it with your children to open up the topic of bullying, a discussion about it and its far reaching ramifications in this age of instant, private and unsupervised communication that technology allows our children to participate in.

In Thank You Mr. Falker, Ms. Polacco deals forthrightly with her struggles with dyslexia, bullying as a result of her inability to learn to read quickly and the compassionate perceptive Mr. Falker who deals effectively with both problems in a kindly, but forthright manner.

Bully addresses a type of bullying that has emerged as a result of our children’s entry and sometimes unsupervised misuse of the world of technology. Bullying as a result has entered a new phase, grafting itself to the instant social media postings that have become part of this age of instant communication. And bullying is now instant too in that it is no longer something that occurs in class, or the schoolyard, but now it occurs behind closed doors on computers and other electronic devices beyond sometimes parental or teacher awareness. And it becomes vicious and viral to those on the receiving end of cyber bullying.

In Bully, Lyla the new girl in school, anxious to make friends, finds an easy companion at first in the tech wiz, Jamie who introduces her to the pace and pitfalls of life in a new town and school. Her quick scan of the cafeteria finds Lyla surveying the usual breakout of groups at lunch.   Categorized as “geeks and nerds”, “toughs” or “sports minded”, each group forms their own clique, to name just a few of the labeled groups. Where does she fit in? The ever present popular “in crowd” is peopled by the rarified order of trendsetters named Gage, Kenyon and Maeve.

Will Lyla embrace the pull of popularity and join the queue of queen bees or, as she finds the trio’s teasing turns viral towards her friend Jamie, will she take a stand? And will the stand have a price as all moral decisions risk? Listening to the still, small voice of her own conscience opens Lyla to a Facebook, MySpace and YouTube smear campaign waged by the popular trio using outright lies and innuendo. Even administrators at school are questioning her honesty concerning a theft of tests.

Ms. Polacco’s book expertly captures the vacuum atmosphere at school life where children sometimes feel they have to face issues alone and daily school life and what people think of you is magnified to be the focus of your day. Her book is timely and teachable, but never preachy in that it does not provide pat answers, but poses questions that kids and parents need to face and answer themselves.  I love its reinforcement of the need to seek out and associate with good friends who will not shun you at the first sign of trouble and happily celebrate your successes with you rather than envy them.

Ms Polacco herself puts it quite well from her observations of 21 years of visiting schools.

I have observed bullying increasing and escalating among children. A new alarming component is their ability to single out other children instantly through electronic devices. This type of teasing is particularly horrifying because it can be done secretly, without the observation of teachers or parents, and because it invites the entire school to weigh in – and often, the victim has no idea who the accuser is.

Lyla’s eventual vindication is facilitated by Jamie, not only with an eye witness account of the truth, but his electronic prowess of message tracing that leads to guess who?

In trying to fathom the eternal why of the reasons behind bullying, perhaps Lyla’s dad has the best reasoning for his daughter to mull over – “Think about it, Lyla: in order for people like Gage’s candle to grow brighter, she has to blow out yours.” Well said, dad. But still Ms. Polacco leaves a question hanging in the air of returning to the school and hoping for the best or going to another. The last line is open-ended – What would you do?