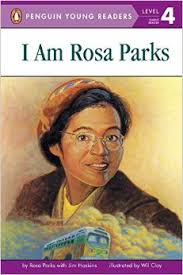 I Am Rosa Parks

February has a slew of days and weeks that celebrate people and events, with the month also set aside for celebrating Black History. The list and legacy of black Americans within the history of our country’s achievements is long, and sometimes painful. But I believe it is a good lesson for young readers to follow the paths of these individuals that are part of who we are as a nation. In their initiation and continuation in the fight against injustice, as well as their many contributions in the fields of art and science, they bettered not only their own lives, but served as examples for what was possible to generations of ALL colors that followed. And, I suppose there is also a truth we want to pass on to our children – that overcoming adversity and unfairness in life is something THEY THEMSELVES may struggle with in their own lives, but need not passively accept, but work to overcome! Hurdles large and not so large will inevitably be part of their lives. So, resilience and determination in the face of obstacles are ways of thinking that need to be instilled, and continually reinforced, in children.

As I review some of the books relating to Black History Month, young readers can point to the history contained in these books and say to themselves, “It’s been done before and so, I can try my best, in whatever situation I find myself, and seek a remedy.” And THAT is not a bad life lesson to begin imparting to young readers. In other words, whatever in life that is worthwhile achieving, is usually done with hard work and sometimes, much struggle. And often, we don’t achieve or win –at least not right away!

Puffin Easy-To-Read has a wonderful book in its level reader series called I am Rosa Parks. May I suggest it to parents, grandparents or anyone either looking for a read aloud in this subject area for a 6-9 year old in Grades 1-3. Kids have, at this point, the capability of reading alone too. That makes it great book report material!

This book has been designated an NCSS-CBC “Notable Children’s Trade book in the Field of Social Studies.” The NCSS is the National Council for the Social Studies and the CBC is the Children’s Book Council. Cooperatively since 1972, these two groups have compiled books to appear on an annotated list selected by a Book Review Committee. It’s worthwhile to look over this list for future reads for your children and I’ve supplied the link at the end of the blog.

I Am Rosa Parks follows the first hand account of Ms. Parks and her defiant act in 1955 against one segregation law in Montgomery Alabama. She famously refused to give up her seat on a bus to a white man. Blacks were seated at the back of the bus to begin with, BUT if a white person came aboard, and the bus was filled to capacity, they were EXPECTED to get up and cede their seat to a white person. Following Rosa’s refusal to give up her seat, she was arrested. The black people of Montgomery, aided by Jo Ann Robinson, E.D. Nixon and Dr. Martin Luther, King Jr. decide soon after to organize and boycott the bus system. This single act is seen in some circles as the beginning of the civil rights movement.

Young readers will find that Rosa was a young girl with a life that in some ways may even mirror their own, but in others, was world’s apart. Rosa’s mom was a teacher and her dad was a builder of houses. She lived on a farm with her grandparents in a nuclear family that was very prevalent then. Perhaps young readers may muse to themselves, “That’s not so different from me.” BUT, in Rosa’s young life, schools, school buses, bathrooms, public busses, lunch counters and other areas of shared use, that we take for granted today, were segregated.

What makes this book so special for young readers is that it is written in the voice of Ms. Parks herself. Here is Rosa’s life and brave act in her own words. Though readable enough for a 6-9 year old, the understanding of how such a world existed close to 60 years ago is a tougher thing to picture for a young mind, but maybe not.

I Am Rosa Parks is the perfect introduction to a time that is worlds away from what your young reader may be familiar with. If the old saying “knowledge is power” is true, this may just be one powerful book they can read, to give them a window on a world they never knew existed, and allows them to meet a woman, in her own words, that helped change it for the better.

Here is the link I mentioned earlier: http://www.socialstudies.org/resources/notable.
The lists available on the site are from 2000-2016 with current lists in single printed copies available from the following at $5.00 per copy.
Children’s Book Council
Attn: Social Studies
54 W. 39th St., 14th Floor
New York, New York 10018