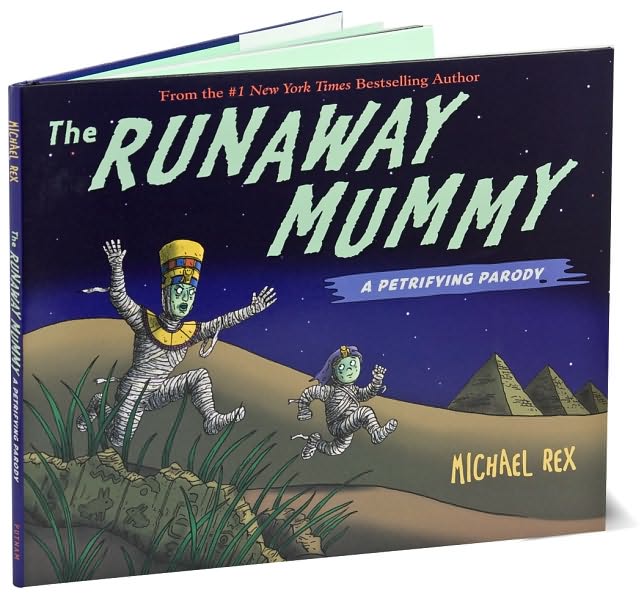 A Spooky Spoof for Halloween!

The Runaway Mummy: A Petrifying Parody

Parodies also called spoofs, sendups or lampoons of an original work in that they satirize through ironic twists, the original piece, are evident in this Halloween picture book treat at The Snuggery.

Ever see Carol Burnett’s spoof on “Gone With the Wind” where fashion conscious, but poverty stricken heroine, Scarlett O’Hara, is driven to using draperies to create a fab gown to impress Rhett Butler? Ms. Burnett’s gown in the parody is equally green and equally velour in feel to Ms. Scarlett’s, BUT it still has the curtain rod running across her shoulders. Hilarious!

Author of the #1 selling New York Times bestseller, “Goodnight Goon”, Mr. Rex is a fan of Ms. Margaret Wise Brown and her “Good Night Moon”. Hence the scary homage to the original as goons too must have their say or day as the normal child might in bidding adieu to a collection of things before going night-night.

Kids love the nonsensical and the ridiculous so “The Runaway Mummy” is a perfect lampoon, and an All Hallows Eve nod of the head to the original, “The Runaway Bunny” by Ms. Wise Brown. I had to pick this parody because my youngest daughter was a special fan of the original. It’s scenes of the Mother Bunny in hot pursuit of her runaway offspring who threatens to morph variously into a trout in a stream, a sailboat scudding over the waters, a rock on a mountain peak and other transformations – all to escape mom. But Mother Love has an answer for each challenge from the small bunny with the words, “If you run away, I will run after you, for you are my little bunny.”

Segue to the parody of “The Runaway Mummy” and is it a far stretch of the imagination to think that Mommy mummies feel exactly the same about their wrapped up offspring who are leaving the pyramids? And it’s a Mommy mummy race that mimics that of the bunny duo. But here it gets spookier.

Here, the mummy girl tries to runaway by turning into a sea serpent. But Mummy has the solution: “I will become a sea monster that will wrap around you and never let you go.” This is a definite game of one upsmanship with the young mummy upping the stakes of camouflage to gargoyle, ravenous plant, huge bat, humongous beast, sky-high monster with the Mommy mummy matching tit for tat until…the little mummy comes up with a surprising escape morph that not even Mommy mummy can abide. It sort of put me in mind of The Addams Family. Their normal was our.. Runnnnnn!!!!!!!

Maybe the right approach to this book is reading BOTH together; first, the original and then the parody for Halloween. Something tells me your young reader will be on the side of the young mummy.  I can tell you from experience those highly independent types, disguised as bunny or mummy, are worth the pursuit. Just be persistent and always use the closing line from the original picture book, “Have a carrot.” It’s a great diffuser!