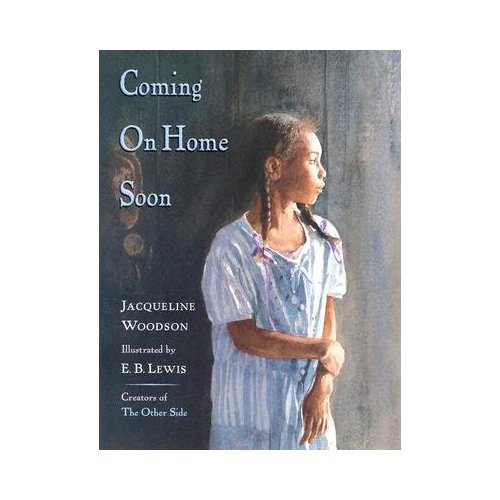 A Testament to the Strength and Resilience of Women

Ms. Woodson’s book is wonderful at illuminating the feelings that are part of family life in a world at war; in this case the art evokes the feelings of sadness, waiting, missing and hoping for a return to normalcy and most of all, for the people who can make it so.

In Coming on Home Soon, normalcy hangs on the return of young Ada Ruth’s mama who has gone off to Chicago in search of work. Leaving Ada Ruth and Grandma behind, she leaves her daughter with the familiar phrases spoken so often between them:

Ada Ruth, Mama said. Do you know I love you more than anything in the world?

More than snow, Mama whispered back the way we’d done a hundred times before.

Or maybe a hundred thousand.

Ms. Woodson’s strength is in evoking the small moments. With mama’s preparation for departure, Ada Ruth’s sensory memory clings to things such as the warmth and softness of her mama’s hands as a Sunday dress is folded into a satchel.  An opened suitcase sits on a neatly made bed with Ada Ruth’s hands on the case as if in the touching, she could make it and her mama stay. Mr. Lewis’ muted and darkened watercolors evoke the sadness and inevitability of separation that is felt and left unsaid. The shadows crowding faces and the absence of light evoke the somber feeling of the narrative.

But diversions present themselves amidst the waiting in the form of a small, black kitten that comes scratching at the door one day. Wars bring rationing of food and the kitten presents one more mouth to feed. Coming on Home has the ability to sustain the actual rhythm of life in difficult circumstances as Grandma, a quiet figure of unwavering strength abides by rituals and routines that keep the hum of disrupted lives intact.

Have you ever heard the famous quote, “They also serve who stand and wait”? The echo of that quote finds concrete echoes in the care of a homeless kitten, the simple struggle to remember what someone we love smelled like, listening to a radio pouring forth information on battles being fought a world away interspersed with the small ingestions of hope in a serving of hot cocoa and biscuits. Ms. Woodson’s Caldecott Honor book is able to balance the feeling of battles being fought on a number of fronts, both internal and external and the theater of operations both at home and oceans away.

In an afternoon trek through the snow, Ada Ruth and Grandma hunt for possum or rabbit for a stew with the halfhearted hope of finding a meal, along with the ambivalent reality of what a successful find will mean.

Ms. Woodson is able to sustain the feeling of waiting and hoping through what is experienced as an unrelenting cold which is a metaphor for the absence of everything that makes a child’s day to day patterns secure. Her Grandma, in the middle of their snow trek, imparts her answer to dealing with the ebb and flow of life.

Don’t you know about cold snaps, she asks, how they come on fast and sometimes stay?

Grandma isn’t merely giving a weather report and somehow both we and Ada Ruth know there will be a thaw when a postman comes up a snow-filled road to the house and delivers into the hands of Ada Ruth a letter in a beautifully familiar cursive hand writing whose first line is to be read over and over again, Tell Ada Ruth I’ll be coming on home soon.

Ms. Woodson’s book is a testament to the strength and resilience of women, old, young and in between during the war years that found themselves cast in unfamiliar roles, but within which they learned to both survive and thrive.

Ada Ruth, her Grandma and mother are a family that your family might enjoy reading about in these tough economic times that have brought and will continue to bring sacrifice and challenge to families in 2011 and beyond. Ada Ruth and her family model the tools to navigate.