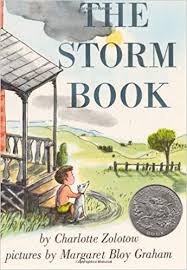 Sublime picture books like this one sure can conjure moments from childhood, and Charlotte Zolotow’s 1952 Caldecott Honor book, “The Storm Book,” sure did that for me. Its dedication says:

who knows the child in

And the author has called that up in me, and I hope it will in you and your young reader.

This book recaptured a moment for me when I was about 10. A group of us were playing, oddly enough, in front of the local funeral parlor, on the main street of our town. And without warning, and with a sudden intensity that stunned me, a gigantic gust of a pre-storm wind blew all around us with a blinding ferocity that almost knocked me over.

I was so taken aback, I can still recall the feeling and the moment, as if it had just occurred.

I hope classic picture books can do that for you and your young reader. If they don’t recapture a specific moment in time for you, then surely the reading of them, with their elegant and descriptive narrative, alongside the art that makes the words live in your mind, will linger long after the book.

Ms. Zolotow’s picture book, “The Storm Book,” opens on a hot, sunny day in the country. A young boy and his white fox terrier are the keen observers of the changeability of nature….and life, for that matter:

“But the hazy sky begins to shift, and the yellow heat turns gray. Everything is the same color – one enormous listless gray world where not a breath stirs and the birds don’t sing. There isn’t the slightest motion of a branch, the slightest whisper of breeze. And still there is something expectant in the growing darkness; something is astir, something soundless and still for which the boy waits.”

“Then it happens! Shooting through the sky like a streak of starlight comes a flash so beautiful, so fast, that the little boy barely has time to see the flowers straining into the storm wind.”

The storm’s effects are depicted even miles away from the country. In the “storm-darkened city,” people close windows, open umbrellas and carry newspapers over their heads against the pelting rain. “The automobile tires make “swish-swishing sounds as they pass.”

At the seashore an old fisherman stands boot-deep in the waves, and wind and rain splatter against his oilskin with a terrible beating sound. His face is wet with sea spray and foam.

In the mountains the rain comes down like a waterfall……A young husband herds his sheep to shelter. His wife looks out of the window at the storm-torn hills, while their baby sleeps quietly in her arms

Ms. Zolotow’s use of language is so viscerally engaging and descriptive that each specific scene pulls the reader into the effects of the storm AND also wonderfully allows the reader to realize that what happens to him or her, is also happening to others at the same time and not so far away.

The connected actions of nature are real and far reaching.

And now to Margaret Bloy Graham’s alternating pastel patinas and her opposing dark and rugged use of art truly make Ms. Zolotow’s words live in you mind and memory. Her creation of a double-paged opening summer scene of a hot country, day dotted with fields of farms and the sun looming like a giant pat of butter in the sky is perfection.

And the change, mid-day, arrives with a frenzied flash of lightning and teeming rain against swaying trees. The scene changes to a gray city with tall buildings looming over a round about circle, wherein a statue of a rearing horse and rider sit and watch people scurry for cabs, then to a setting of a mustachioed fisherman struggling to secure his rowboat amid a tossing sea, to, at last, the calming release of a mother gently rocking her baby; bottle of milk at the ready for feeding, as the family dog watches the rain pelt the windows, allowing the reader to sense that all is resolved and secure.

And, the ending is also double-paged with a magnificent rainbow-filled sky;  for as the little boy asks at the start for the explanation of the lightning, so he does also with the rainbow:

“That’s the rainbow, little son,” says his mother, “to show the storm has passed.”

And she slipped her arm around him so gently he didn’t notice, as he watched the beautiful sunlit colors arching over the world.

There is so much for your young reader to be both learned and intuited from Charlotte Zolotow’s “The Storm Book,” as well as visually mesmerized by  Margaret Bloy Graham’s art.

I hope you get the opportunity soon to sample this perfect picture book.

And while I am not one to rely solely on critics, I will here: