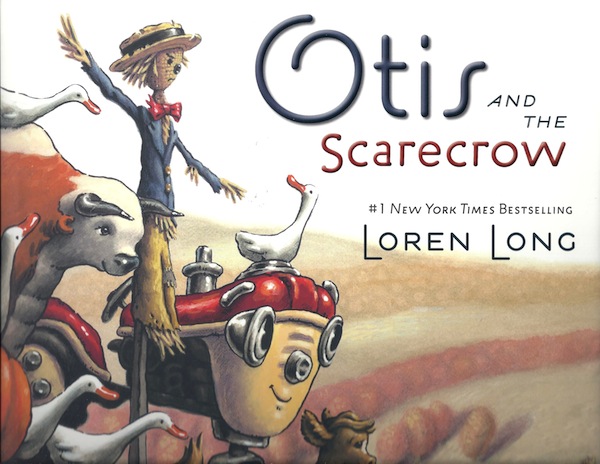 Otis and the Scarecrow

What do we expect from our friends? It can lead to the question of what exactly IS friendship? It certainly does seem to involve expectations on both sides, right? But what if a small red and cream tractor could model to kids that it doesn’t ALWAYS have to be like that? It’s easy to be nice to those that are NICE to us and who reciprocate in kind, our friendship overtures. That’s pretty much a given. But what about when they do NOT?

In Loren Long’s newest adventure of the beloved tractor named Otis in “Otis and the Scarecrow”, Otis models to readers that sometimes it’s enough to just BE with someone, that the kindness shown by a person’s mere presence is a gift of friendship in and of itself.

The familiar farm scene is here where the friendly red and cream tractor resides and it’s dressed for fall. Cornfields are filled with crows; despite the appearance of a lonely stern faced scarecrow that stands in solitary silence in the middle of the wind blown field. Overtures of friendship are made to the newcomer by former “newbies ” to the farm such as a puppy and small calf. They too, were once the “new kid on the farm.”

And in turn, the friendly tractor named Otis went out of HIS way to make THEM feel welcome – for one on a dark and stormy night, he tractored to the rescue and for the other, caught in the middle of a Mud Pond, he brought the calf to safety.

But what do you do with a non responsive type lIke the scarecrow whose job and reason to be is to stand silently ALONE in a cornfield? First, Otis models to others what it’s like to just BE with someone in companionable SILENCE. Hmmm. Sounds easy. But here we enter quite a long learning curve for some of the farm inhabitants, especially the puppy, bull, calf, ducks, horse – well you get the picture. It’s downright HARD to be quiet as any child can tell you, yet Otis makes even THIS into a GAME.

In a very serenely sweet scene amid a downpour of a deluge, Otis MODELS what it is to BE there for someone, when they are unable to respond as we wish. He departs from the group huddled under an apple  tree and engages quietly and kindly with the scarecrow – on the scarecrow’s terms. He STANDS UP  while the others hunker down. Kids will get this quietly noble action of the small tractor named Otis.

And maybe, just maybe, THEY might emulate their OWN version of his soft “putt puff puttedy chuff shhhhhh” attempt at friendship with someone THEY may know!

Smiling faces gazing up at you when you’re lonely are pretty hard to resist – and so is “Otis and the Scarecrow.”

This scarecrow is welcome at our farm anytime – and so is OTIS!!