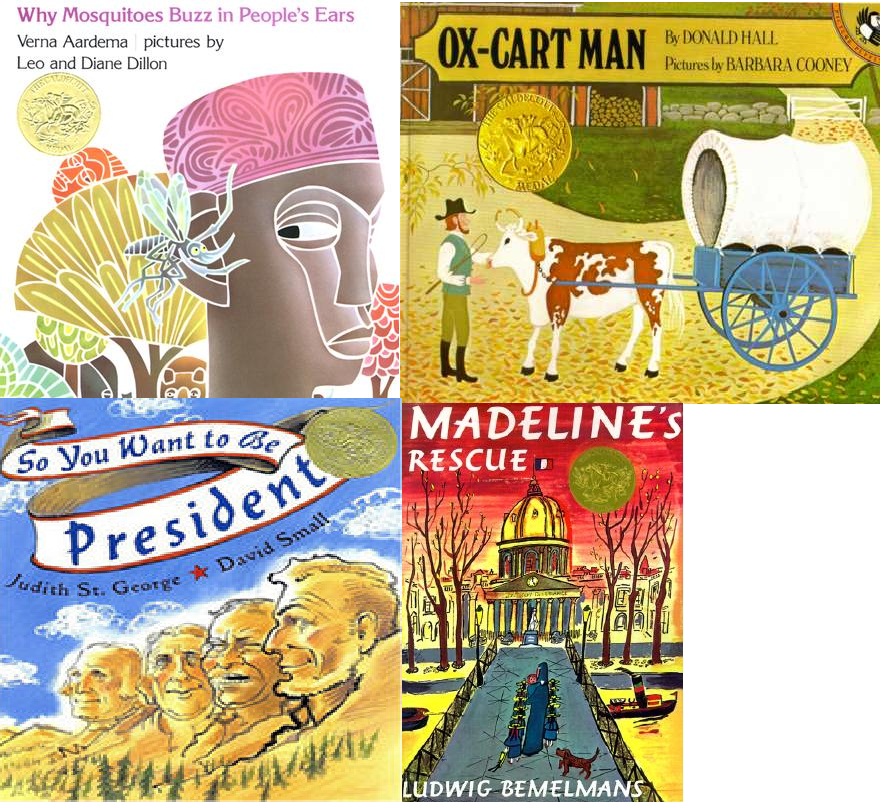 Way Back Wednesday: The Canon of Picture Books

Walking Down Classic Corridors with the Caldecott

Merriam-Webster defines the word “canon” as “a sanctioned or accepted group or body of related work” as in the canon of great literature.

I recently wrote a blog that intimated that just as most literate adults have read a canon of great literature that reaches a high water mark, so too in picture book literature there is a sort of canon of best books that define what a classic picture book is and should be in content and style and in the ability to move the imagination and heart of our youngest readers. That canon’s foundation, to some, starts with the list of Caldecott award winners and honor books begun in 1938. The Caldecott Medal “shall be awarded to the artist of the most distinguished American Picture Book for Children published in the United States the preceding year.” Awarded by the Children’s and School Libraries section of the American Library Association, it’s named in honor of Randolph J. Caldecott, nineteenth-century English illustrator.

At the Snuggery, in our Way Back Wednesday segments, we’ve tried to shine the spotlight on these gems that might have fallen off young parents’ picture book reading radar or slipped their notice. This year, in fact, marks the 83rd Anniversary of the Caldecott Medal and I’ve written blogs on many of them this year at the Snuggery.

Have you ever had a feeling of perfect synchronicity, where things fall in an almost perfect alignment or “meaningful coincidence”?  I had one of those moments when I came face to face with the canon or at least large parts of it. I couldn’t take the smile from my face as if I were recognizing friends; friends that I wanted to introduce around.

I walked the halls of Penguin Young Readers, and there, as I turned corridor after corridor, lining the walls were the covers of the canon – framed. To see classic picture books in a store randomly displayed is one thing. BUT, to see one publishing house and its contributions to the canon was amazing! Many were books I’ve certainly read to children, my own included, and to other young ones in story hours I’ve done. It was a moment I’ll remember.

There was something about seeing row after row of great picture book covers that gave me a renewed hunger to share these books with young readers that haven’t heard the words and seen the pictures that make the stories come to life and to share with children something of the lives of the wonderful authors behind them. I didn’t just see the covers in those corridors. I saw the children for whom they were written who’ve read them and those who are still waiting to read them.

Don’t let your children and grands miss out on the start of the great picture book canon!  And while you’re at it, add your own favorite “read it again” to the list! Back to school is the perfect time to “connect with the canon” and jump start your children’s love of reading. You and your young reader can connect with all that lies beneath the covers of the canon!

Here is a list of just some of the extraordinary book covers I saw on those Caldecott corridors: