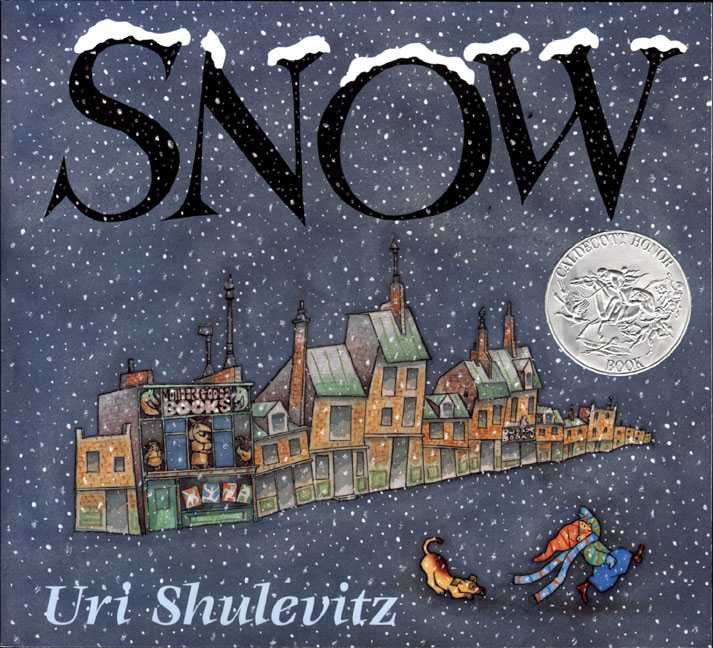 If you’ve seen the 1950’s movie, “White Christmas” on TV during the holidays with your kids, I’ll bet you thoroughly enjoyed it and so did they. Starring Bing Crosby and Danny Kaye, plus that stellar hoofer, Vera-Ellen, along with songstress Rosemary Clooney, aunt of George Clooney, complete a quartet boarding a train for the holidays to an out-of-the-ordinary, snow-starved Vermont. It also features some wonderful Irving Berlin tunes. One of them is a favorite of mine and its title is the same as our Way Back Wednesday picture book, also called “Snow” by Uri Shulevitz.

Berlin expertly and tunefully captures the little kid released in each of us when it snows, with its hummable lines,

“I’ll soon be there with snow,

I’ll wash my hair with snow,

And with a spade of snow,

I’ll build a man that’s made of snow

And, in his book, Uri Shulevitz no less wonderfully captures the prognostication urges of an offbeat gaggle of residents via delightful illustrations of a town filled with comical, higgledy piggledy buildings.  Overhead, gray- filled skies and rooftops prompt a grandfather, followed by a man in an absurdly tall hat and an elegantly coiffed woman toting an umbrella, to wax philosophical on the chances of snow. Zero, they each intone in turn, with no further discussion allowed.

It’s a giggle, since as we all know, the chances of getting it right is very much up to Mother Nature. She does not listen to media outlets. A very prominent radio toted atop the shoulders of a townie, and even the blaring TV, insistently discount the chance of the white stuff falling on this burg, with a succinct, “No snow” emphatically forecast.

The one and only citizen undeterred by adult pronouncements is a small boy who joyfully points to a single flake and its myriad collection of lacy followers. This true believer, trusting of his senses, says in a matter-of-fact manner, to each naysayer in town, “It’s snowing.” The result is pure enjoyment for your small ones, as you read, and they revel in the whiteness changing the landscape of this tiny town. Here, seeing is believing!

“Publishers Weekly” praised this Caldecott Honor Book and winner of the Charlotte Zolotow Award with a starred review that said in part:

“Shulevitz uses text as spare as a December landscape to cast a spell of winter magic…Pure enchantment from start to finish.”

Everything in the town grows “lighter and whiter”.

“Snow” is a perfect predictor of the inevitability of the white stuff to appear at will and leave wonder in its wake.

Listen to Irving Berlin’s song called “Snow” as an accompaniment to Shulevitz’s book for a full experience of snow lyrically displayed. Sung in harmony by the quartet mentioned at the start of the review, it can be viewed on YouTube; just type in White Christmas – Snow.  It just doesn’t get any better with Shulevitz’s award winning picture book words and illustrations alongside Irving Berlin’s catchy tune performed perfectly.   Two forecasts called “SNOW” in words and music, provide a perfect backdrop for cuddling and listening with your littlest ones, as they enjoy reading and listening to two classics paying homage to the snowdrifts that can magically change a landscape – and each of us.

And here’s the tune called “Snow” from the movie White Christmas that you can sing along with as you read this Caldecott winning homage to the white stuff.