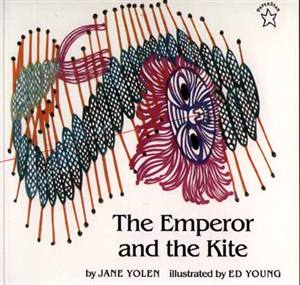 The Emperor and the Kite

As we head into the second week of the fifteen day festival celebrating the Chinese New Year and 2012’s Year of the Dragon, I find Jane Yolen’s The Emperor and the Kite both timely and an essential picture book classic waiting to be rediscovered in this Year of the Dragon which, like the tale, promises a bit of volatility. Ed Young’s traditional Oriental papercut illustration technique adds to the grace and style of of Ms. Yolen’s ancient tale of love and loyalty rewarded.

Designated as a Caldecott Honor book in 1967, it was reissued in 1988 and continues to delight.

I’m always interested in what inspires an author’s idea for a book to pop up and in Ms. Yolen’s case, it apparently stemmed from her father’s reputation as a world-class kite-flying expert! Imagine the aerodynamic factoids that came her way in researching what makes a kite fly and how to keep it airborne; something that I loved to do, but found hard to keep aloft for any considerable length of time! It’s not as easy as it looks. If your children ever saw the charming movie, Nanny McPhee, they’ll recall one of her little charges needed a bit of magic to get the darn thing aloft. Is it in the wrist, the string, wind intensity and direction or just in the proper kite? Still don’t know. But a certain Chinese princess does.

Princess Djeow Seow, youngest and smallest daughter of the Chinese Emperor demonstrates her prowess with a kite for a search and rescue operation. Using a strong rope of her own hair interwoven as a tail for a kite, it figures prominently in the rescue of her father imprisoned in a tower. She rescues him Rapunzel style from his evil imprisoners in this story that has a quiet poetic magic all its own. The best part for kids I’m sure is the part where everyone gets what they deserve – for good or ill. Imagine the look on the faces of the other four sons and three daughters who fled, failing to act on their father’s behalf, when he up and disappears from view, aside from their continued “sobbing and sighing”. They return to see the tiny, previously ignored Djeow Seow seated next to the newly released Emperor rightfully returned to his throne! Learning to love impartially is a lesson the Emperor also learns in his imprisonment, especially from the example of a determined small princess who can fly a mean kite – to freedom!  Kids will love this high-flying kite commandeered by a tiny tyro!