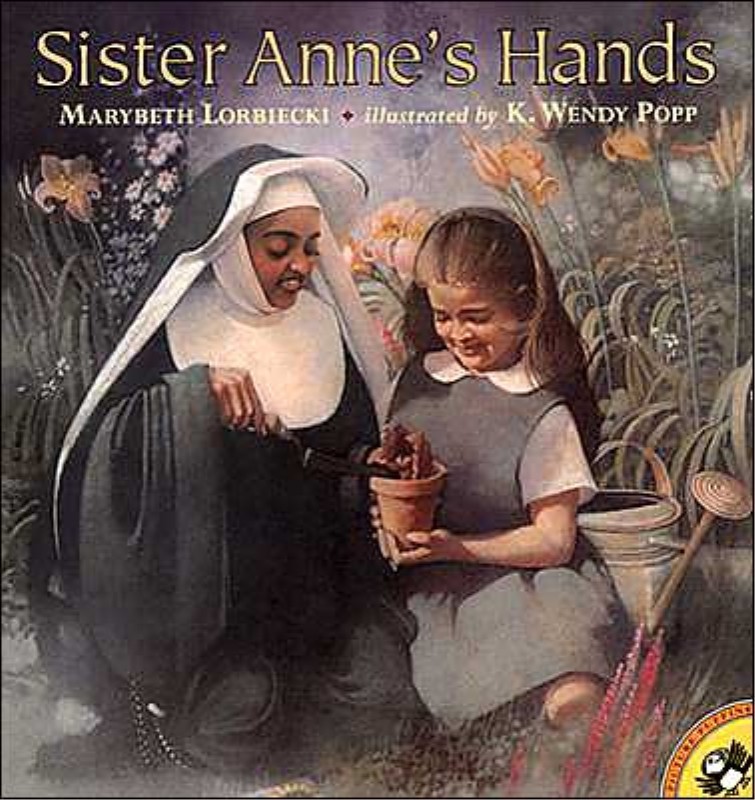 March is Women’s History Month and March 8th through 14th is the first ever National Catholic Sisters Week that is intended to celebrate the generations of sisters who have taught in schools, served in nursing homes, orphanages and hospitals throughout the United States. Generally they were the glue that, in many ways, held the institution of the Catholic Church together seamlessly. And they did this all with a quiet determination and dedication with little recognition other than the conviction that their lives and the thousands they touched, were a testament to the faith they believed in. Sadly their numbers are dwindling as young people choose other avenues of service.

All of this put me in mind of a wonderful picture book I remember called, “Sister Anne’s Hands” by Marybeth Lorbiecki with illustrations by Wendy Bopp.

Sister Anne is an African-American sister teaching in a parochial school in the 60’s. Her teaching and storytelling methods are inventive and interesting as Wendy Bopp’s illustrations portray Sister Anne’s students held in rapt attention when she speaks. Just imagine how hard that was to pull off with 50 something children in an average class at that time!  The picture book’s story is told through the eyes of young Anna, a student in Sister Anne’s class who is confused when she overhears her parents say, “I don’t know how a woman of her color is going to survive.”

Sister Anne confronts the concrete meaning of that overheard phrase when a paper airplane sails through the air in her classroom with the following words written on it:

Get any black on you.

The racial slur from a young unformed mind, obviously influenced by others, has Sister Anne react with a calm demeanor as she says she “needs quiet time to think about this.”

And Sister Anne opts to react to the racial discrimination in her young charges by informing them of her own experiences and heritage that causes some parents to withdraw their children from the class. But the children who remain are the fortunate ones. They are the recipients of the wisdom and talented teaching of a wonderful young woman who has an innate love for the young minds that come into her sphere for one special year. Young Anna in Sister Anne’s Hands and it seems, the author herself are both lucky enough to have come under the influence of a dedicated sister whose persona is only symbolic of the thousands like her. Wendy Bopp’s beautiful art work coupled with Ms. Lorbiecki’s view on a very contemporary issue of the 60’s is beautifully executed.

And in that same vein, this book put me in mind of a sister I once met that recently passed away. She became the teacher of a young African-American student named Clarence Thomas; the very same Clarence Thomas that went on to become a Supreme Court Justice. Her dedication to the teaching of young African American students at a time in our country’s history when it was, to say the least, frowned upon, was both heartfelt and heroic. This sister, and others of her order put the education of ALL children first. Her core belief, put into action, was that every student deserved to have an equal chance at reaching his or her goals and her entire life was in the service of that belief.

So to ALL the Sister Annes of this world, and especially to the sister that I just mentioned, “Thank you! For the world will not see your like again.” And by the way, I had a Sister Anne-like teacher too!