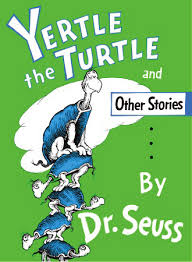 Guess that famous turtle named Yertle hasn’t heard that there is a turtle soup shortage! Or maybe he has!

Yertle who longs to be King of the Turtles uses underling turtles to put himself above the rest. Higher and higher Yertle stacks these poor things, with Mack the turtle in the basement, so to speak. Imagine the pain and hunger imposed on the bottom rung turtles of this turtle tower?

I was recently listening to a news report while on vacation that mentioned a dearth of turtle soup on store shelves.

And why has this happened? Turtles are in short order, rare supply, and scarcely to be found. At least since they have been put on the endangered list, they can no longer be hunted, captured and cooked. Coastal developments, fisheries, pollution and climate change, all have a played a part in the depletion of the numbers of turtles. Turtle protection habitats for helping and recovery of these terrapins are in the news if you look for them. And that is good news for the Yertles and Macks of the world. Well, maybe just the Macks of the turtle tribe deserve the good news. Yertle has a ways to go in his redemption as this picture book tale reveals. As the adage goes, “Pride goeth before the fall.”

As an interesting  sidebar, did you know that during the Great Depression, turtles were consumed, and referred to as “Hoover’s Chickens” in the south? Wonder how President Herbert Hoover felt about that appellation? They must have been plentiful and tasty in a time of food lines across a country reeling from its economic woes.

But, back to Dr. Seuss’s Yertle, as the classic picture tale reveals rebellion rearing its head in the turtle tower among the ranks of those squished at the bottom of the heap. Will Yertle continue his ascent? Will Mack and the other terrapin tower partners rebel?

When finally “the moon dares to be higher than Yertle the King,” something has got to give, and Yertle’s collapsing tower is quick and calamitous, as he soon devolves into “King of the Mud.”

It’s a classic picture book read for young ones. For some it could be seen as a morality tale of building ones ascent on the literal “backs” of others. Or maybe a scientifically gentle reminder that “what goes up must come down.”

But my bet is on kids that may intuit from this classic read that how we ascend, or do better in the world, is just as, or much more important than, where we rise to.