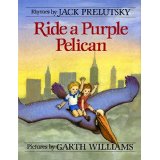 Here’s another winning combination of rhymes, coupled with outstanding art, to celebrate National Poetry Month this April with your young readers.

Hop aboard a flapping purple pelican and meet characters such as Cincinnati Patty, Buntington Bunny, the baboons of Kalamazoo, Timble Tamble Turkey, plus a gaggle of others, for a riotous and rollicking poetic ride.

“A modern-day alternative to Mother Goose.”

I’m pretty much of a purist when it comes to love of Mother Goose rhymes with their fetching cast of characters, but maybe here,  in “Ride a Purple Pelican,” the fresh air of a poetic door ajar, is what’s needed for an added measure of zany poetic zest!

I’m sure Mother Goose wouldn’t mind this poetic ride in the least; in fact she’d probably hoist her hooped skirts, and climb aboard!

“These shiny new rhymes sound as if they are old favorites.”–Booklist

The ultimate critics are, of course, you and your young reader. But it’s pretty hard to find fault with the art of Garth Williams here, whose renowned art added greatly to the artistic realization of Laura Ingalls Wilder’s Little House series and its inhabitants, along with E.B. White’s Charlotte’s Web and Stuart Little, to name but three of Garth Williams’ illustrative accomplishments that made the written word come to life in the eyes of generations of children.

At his passing Mel Gussow, critic of the New York Times said, “He believed, (referring to Garth Williams), that books given or read to children can have a profound influence.”

I can only nod my own assent to that quote by nodding vigorously.

Jack Prelutsky, who served as the Poetry Foundation’s Children’s Poetry Laureate from 2006-2008, makes his love of writing poetry for kids and adults alike, evident here.

Mr. Prelutsky feels, “Children seem naturally drawn to poetry – it’s some combination of the rhyme, the rhythm or the words themselves,” and in “Ride a Purple Pelican,” along with its goofily grand rhymes, you may just find the picture book to stoke the poetic imagination of your child or grandchild.

It may not feature the dire straits of dieting  Jack Sprat and wife of Mother Goose fame, but it’s worth meeting the likes of a fellow named Pennington Poe whose tale is woe itself:

your truck is so rusty

it’s stuck in the snow,

your horses are sleeping,

your donkey is slow,

and that’s why you’re weeping,