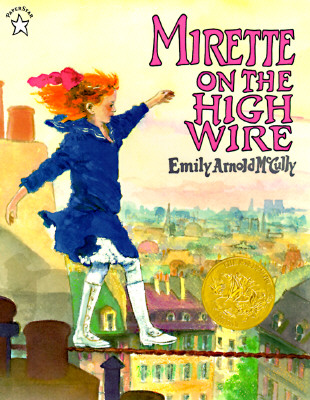 Mirette on the High Wire is a wonderful book. Winner of the Randolph Caldecott Medal, a New York Times Best Illustrated Book, an ALA Notable Book and an ABA pick of the list book.

She is much like the Anne Shirley of Anne of Green Gables. She is high spirited eager for adventure just like Mirette. Though Anne may be set in Prince Edward Island, Mirette finds herself in the Paris of 100 years ago living in a boarding house with her mother the widow Gateau, owned by her mother. In that boarding house live a collection of acrobats, jugglers, actors and mimes from near and far.

One evening a tall stranger with a sad face approaches Madam Gateau’s Inn and introduces himself as Bellini, a retired high wire walker- and announces he is there for a rest. She gives him a room on the ground floor with no view, which he pronounces is perfect; and he says “That he will take his meals alone.”

He is a man of mystery who intrigues Mirette. One afternoon she comes out into the courtyard and watches Bellini cross a wire several feel above the ground; and she is imminently entranced. She says “Oh please teach me, my feet are already unhappy on the ground.” But he shakes his head. Nonetheless she watches him every day sliding his feet on the wire, without ever looking down.

Finally she can resist no longer, with her friend absent she herself jumps up on the wire to try it out, and finds out that it is not as easy as it looks. Her arms fly about like windmills and she finds herself on the ground many times. But she keeps trying, and finally after a week of many many falls, she walks across the length of the wire. She can not wait to show her friend what she has accomplished.

When she finally gets up enough courage to show him her accomplishment, he tells her that “In the beginning everyone falls but most people give up. But you have to keep on trying.” And then perhaps she has the “talent” as well. Every day she gets up two hours early to finish her chores before the sun gets up to practice. He tells her “never let your eyes stray, think only of the wire and of crossing to the end.”

One day an agent from the Hippodrome in London rents a room at Madam Gateau’s and notices Bellini on his way out the door. And remarks “This is just not any high wire walker- This is the Great Bellini! He is the one who stopped in the middle of a high wire act across Niagara Falls to cook an omelet on a stove full of live coals, he crossed the Alps with baskets tied to his feet, fired a cannon over a bullring in Barcelona, walked a flaming wire wearing a blindfold in Naples. This is the man that has the nerves of an iceberg” the agent says.

Mirette races to his room asking him if all these things are true, and for the first time she notices something she has not noticed before- FEAR. The reason he can not do it any longer is because he says “ I am afraid. Once you have fear on the wire it never leaves.” Bellini says. Mirette insists that he MUST make it leave, and the down cast Bellini says “He can not.” The question of course in every reader’s mind is-Can Mirrette resurrect Bellini’s career and his faith in himself and in that process can she face her own fear if it appears?

The ending of the book is suspenseful and exotic. Mrs. McCully justly earned the New York Times Best IIlustrated Award for Mirette on the High Wire. In the final pages there is a scene of the great Bellini and Mirette on the high wire facing each other, high above the streets of Paris arms extended towards one another against a midnight blue sky; and it is absolutely a perfect picture of trust and triumph. This is a book well worth reading.