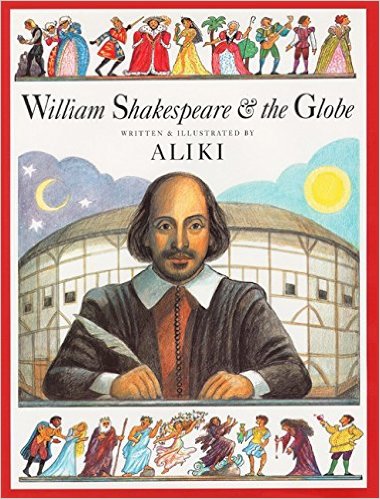 Way Back Wednesday Essential Classic: The Bard Himself!

William Shakespeare and the Globe

written and illustrated by Aliki

And this our life…

Finds tongues in trees, books in the running brooks.

Sermons in stones, and good in every thing.

April 23, 2016 marked the 400-year anniversary of the passing of the Bard of Avon; one William Shakespeare.

The Snuggery is a tad late to the performance, but could anyone that loves books let this date pass without marking it in some way?

And there are wonderful picture books that  give young ones a window into the world of Shakespeare. Here is but one to tempt your young reader, and maybe even leave them wanting to know more of this writer without peer.

To say his influence continues 400 years after his death, merely emphasizes the enormous wealth of Shakespeare’s contributions to our language, and his literary legacy that permeates our culture still.

Yet, his life is still shrouded in mystery, to say the least. Aliki’s picture book not only helps lift the veil a bit, but also provides young readers with all the flavor and factors that influenced Shakespeare’s unparalleled work, and, calls up his lengthy and prolific literary legacy for them to taste, and hopefully, leave them wanting to sample more, as they grow older.

They will see that so much flows, even today, in speech and in the continued performances of the 37 plays that he wrote, and the poetry he left behind.

Consider just some of the phrases and words and expressions that we use today that emanated from his plays. There are some 2,000 of these words and phrases, and we use them blithely today, without a hint of where they came from. Here are but a few:

A tower of strength

Too much of a good thing

In my heart of hearts

A dish fit for the gods

Aliki Brandenberg, for that is her full name, has given young readers a grand and gloriously researched and drawn picture book, converging the lives, not only of Shakespeare, the famed dramatist/poet, but that of an actor, director, and visionary named Sam Wanamaker.

You may remember his wonderful performances in such films as “Private Benjamin”, “Baby Boom,” and The Spy Who Came in from the Cold” to name but three.  Aliki’s picture book also tells young reader’s of Sam Wanamaker’s own seemingly impossible Shakespearean dream….that came true. And what a dream it was.

But first, she gives young readers a portrait of a playwright/poet named William Shakespeare, written fittingly enough in the form of a play.

It’s written, as Shakespeare himself might have envisioned it; in five successive acts, each with scenes outlining pertinent information on Shakespeare’s own private life, the times that shaped his work, the patron of the arts, Elizabeth the I, who reigned as queen during Shakespeare’s time, and supported his work and those like him, and even Shakespeare’s theater contemporaries are also mentioned such as playwright and friend, Ben Jonson, plus set and costume designer, Inigo Jones, were all enriching the theater experience of their time.

Young readers will get a sense, through Aliki’s wonderfully detailed art, of the teeming London of Shakespeare’s time, and hear of the personal tragedies, such as the death of his son, Hamnet, that fed his plays.

They will have a peek at the performance playhouses called The Theater, The Rose and The Swan, that allowed traveling actors who “were often treated like vagabonds,” a chance to act.

And through Aliki’s life of Shakespeare runs the thread of the dream of not only Sam Wanamaker, but also architect, Theo Crosby, and a host of other talented artisans that eventually bring the dream of a resurrected Globe Theatre, where Shakespeare’s plays are again performed, to fruition.

A new Globe Theatre eventually rises, and is built strangely enough, not far from the rediscovered digs of the original Rose Theatre. And later, they unearth “even found part of the Globe” of Shakespeare’s day.

“We are such stuff as dreams are made on….!” That’s from Shakespeare’s, The Tempest and his quote fits.

The idea for the rebuilt Globe Theatre is sparked initially by Wanamaker’s discovery of a small half-hidden plaque commemorating The Bard of Avon on a trip to London as a young actor, much like Shakespeare.

He is appalled by its insignificance, and deems it a paltry homage to this greatest of playwrights. Wanamaker begins immediately planning the possibility of rebuilding Shakespeare’s original Globe Theatre, burned to the ground, while a production of Shakespeare’s Henry VIII was in full swing. The roof was of straw and the fire spread quickly.

It seems a stage cannon, part of the play, caught fire, and the blaze spread and consumed The Globe. A second Globe, this time, with a tile roof is constructed, but it too is literally pulled down.

But, does Sam Wanamaker’s dream, conceived in 1949, ever rise from the ashes? If you’ve been to London, you can see that it has. It opened in 1999, though sadly he and its architect, did not live to see its completion. But many have, and continue to enjoy the dream.

Dream big, seems to be a theme here, and what’s wrong with that, especially if the dream has a Shakespearean theme to it?

If you want your young reader to have an early and enriching taste of this greatest of playwrights who had an almost uncanny  insight into human nature, and whose works will surely enter their lives at some later academic interval, then this is the picture book to start them off on a lifelong journey of discovering Shakespeare.