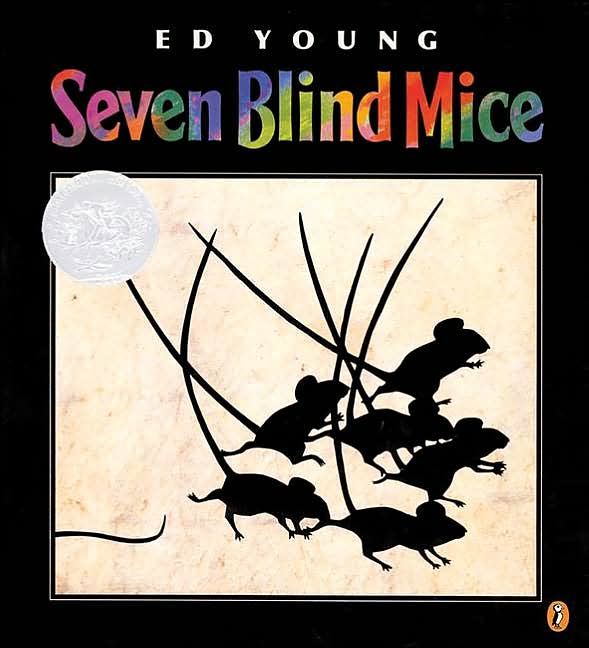 Ever hear the phrase that there are two side to every story and the truth is somewhere in the middle? How about SEVEN sides to a story?  In Ed Young’s Caldecott Honor winner of 1993, “Seven Blind Mice”, he has constructed a beauty of a fable with a moral for both mice and men. The moral: “Knowing in part may make a fine tale, but wisdom comes from seeing the whole”. His modern take has its origins in the traditional ancient Indian tale of “The Men and the…”well, come to think of it, if I tell you THAT title, I’ve taken the edge off Mr. Young’s telling. And this is a tale worth reading narratively and taking in visually.

In Ed Young’s beautiful collage illustrated story, seven blind mice are alarmed by a “strange Something by their pond” near home. Each mouse in turn with varied coloration and, on a consecutive day of the week, goes to check out the Something. And remarkably enough, with each touch of the individual mouse to a small portion of the Something, a different conclusion is drawn as to its appearance. Depending of course which part, the “mouse in the dark” touches, he comes up with a differing analysis as to what the Something could be.

It’s variously described as a pillar, snake, spear, cliff, fan and rope. Huh? How can the Something be all six?

Arguments break out among the gathering of rodents and it falls to the Sunday, White and seventh mouse and only female to unravel the mystery. With her fastidious attention to detail, the whole of the Something is investigated as she traverses it from one end to the other and from side to side.  When taken as a WHOLE, the Something is indeed sturdy, supple, wide, sharp, breezy and stringy as each of the previous blind mice have reported. BUT, these qualities are just a part of the total picture and add up to something quite different than the other six imagined. Wisdom is attained by knowing the whole, you silly mice!

I won’t ruin it for you or your young reader if you’ve not yet sampled this treasure by revealing what the Something is, but its revelation is HUGE!