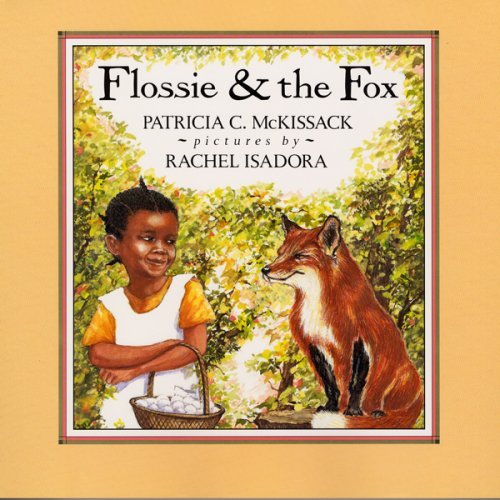 “Flossie and the Fox” by Patricia C. McKissack; pictures by Isadora Duncan

Patricia McKissack, in her introductory “Author’s Note” confides, “Before I became a writer, I was a listener.”  This fortunate recipient of stories told on hot summer evenings by her grandmother, poems dramatized by her mother, and most especially, delightful tales spun by her master storyteller of a grandfather in the rich cadence of the rural South, is shared with us here in this delightful retelling of one of his gems. What a rich legacy she inherited of oral folklore and we are fortunate to have a semblance of what it must have felt like to sit on that porch and drink it in as we listen to her grandfather’s tale of lil’ Flossie Finley and this chance meeting in the Piney Woods in her “Flossie and the Fox”. Pull up a rocker, sit a spell and just listen!

The only Flossie I can recall was Flossie Bobbsey of Bobbsey Twins series fame by Laura Lee Hope. I do remember thinking the name exotic and not as pedestrian as her older and more practical sister, Nan. Flossie was a handful.

Well, this Flossie Finley can more than hold her own as she ventures out on a delivery errand for Big Mama with a precious basket of eggs under her arm, clad in a white pinafore apron, slid over a golden dress and black lace up shoes. The warning is given of a certain sly fox in the environs that is scaring folks and chickens in these parts with his particular fondness for, you guessed it, EGGS!

Having never encountered a real fox, Flossie is curious as to how she will make him out. Big Mama thinks for a bit and offers, “Chile, a fox just be a fox. But one thing for sure, that rascal loves eggs.”

Children will be nudging you with a knowing look and a “She’s definitely going to meet that fox.” Kids are usually one step ahead of the reader, unless this is a “reread”. They are on the same page as Flossie, and that is, two steps ahead. In fact they very well could be Flossie, as least in fox savvy!

Not too far into the golden green and sun filtered woods, Flossie not only encounters said fox, but he boldly announces his identity to her! Flossie is the wily one as she puts the fox through a series of questions in which the tables are skillfully turned on the predator as Flossie insists he must prove his identity. “Well, whatever you are, you sho’ think a heap of yourself” “I don’t believe you a fox, that’s what.” The clever Flossie quickly begins putting this furry felon through his paces.

The sputtering, disbelieving fox offers his thick luxurious tail, pointed nose, sharp teeth, and ability to run at top speed as evidence of his foxiness, but Flossie refutes him at every turn. You could be a squirrel, rabbit or cat, she counters convincingly.

The poor beleaguered fox is practically begging for additional chances to convince the scoffing Flossie of his true nature.

Readers will find themselves laughing at the final table turning the wise Flossie employs as she nears her destination of Mr. J.W. McCutchin’s place at the far side of the wood.

Mr. McCutchin’s sharp-eyed hounds know what a fox looks like and as we survey the intact basket of eggs and Flossie’s smiling face, so did Flossie! I think the tactic used is called in the vernacular, “biding ones time”.

Kids will love seeing and hearing the mounting frustration of the fox, incredulous that this mite of a girl not only does not fear him, but insists on proof of his being a dangerous character. With each plea for her belief in him, he exhibits increasing frustration with her nonchalant attitude and begins piteous pleas for her affirmation of his identity. As he says huffily, “A little girl like you should be terrified of me. Whatever do they teach children these days?”  He is kerfuffled to say the least. Ms. McKissack’s liberal use of a sweet rural dialect of the South enhances the telling and the illustrations make Flossie appear as brave, endearing and unruffled.  The fox is handsome, worthy, but an out matched opponent.

Folks, he didn’t stand a chance. Take my advice and enjoy this long leisurely stroll through the Tennessee woods with your kids on a lovely summer day with Flossie and one cocky, but overly confident and out maneuvered fox. Hope Big Mama has a big glass of lemonade when we get back!