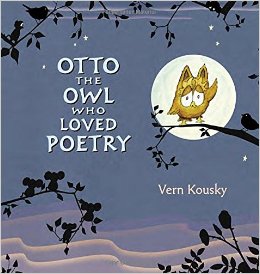 Otto the Owl Who Loved Poetry

“To be an individual in a world that is constantly trying to make you something else, is an accomplishment,” said Ralph Waldo Emerson. And it’s probably one of the hardest truisms for young ones to learn.

If they can somehow come to an understanding of it early in their lives, so much the better, or else they might spend a good deal of their young lives unlearning how to be a people pleaser.

This is an example of where a picture book is worth more than a thousand words, explanations, examples or prompts from parents.

In his debut picture book, Vern Kousky introduces young readers to a young owl named Otto who loves odes and other forms of poetry. He adores Keats, Dickinson and T.S. Eliot, with a smattering of Christina Rossetti, Joyce Kilmer and Robert Louis Stevenson.

Instead of hunting, hooting and roosting in the hollows of trees, this owl is declaiming poetry from its branches. He is not in what is considered the normal arc of young owl activity – and he feels it; painfully.

While others of his breed are out roosting, he is reading. And while they are out hunting for prey, he’s out making friends with the prey. Hmmm.

This is not your average owl, and thank goodness he isn’t. He can recite poetry from a branch at night in clear tones that ring out into the night sky:

When the evening is spread out

Eliot would have reveled to hear this young Otto the owlet speak those words trippingly from his young tongue.

But alas, his peer group is not of the same mind, and takes to calling him, “Blotto the Bard.”

Otto asks the same generally phrased question of the universe that kids have asked since time began, and the torment of teasing arose with it. “Why do all the owls tease me?” What could be wrong with poetry.”

Seeking approval of the peer group? Very bad. Solution? He decides to cut and run. Not a grand idea.

Yet, his rash decision does propel him into a sort of ode to the moon; his first poem! And he finds listeners among the forest folk that pelt him with cries of “More!” “More!”

He comes to the revelatory discovery that poetry is to be shared and enjoyed by the group, and so, when a trio of owls appears, he recites:

“I’m nobody! Whooo are you?

And soon this poetry thing is catching on like a woods afire. Another owl recites:

“Whooo has seen the wind?

Neither I nor you:

But when the leaves hang trembling

The wind is passing through…”

The young owl becomes a trend setter as poetic words fly through the night air when poetry becomes accepted by his former foes, and even, dare I say it, enjoyed!

Mr. Kousky has stumbled upon a sweetly unique tale of how to teach an important lesson to young readers: to remain an individual among ones peers by being an original.

For you see Otto now knows, as we all do, that originals are ALWAYS worth more than a copy!