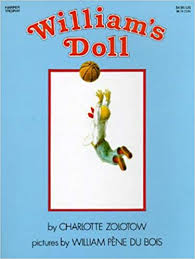 “William’s Doll “by Charlotte Zolotow: author of over seventy books as well as editor, publisher and educator, has contributed some of the classic reads of children’s picture book fame.

And she has been accompanied on her artistic journey by some of the finest illustrators in picture book art, such as Garth Williams of “Little House on the Prairie” fame, who illustrated “Over and Over,” Maurice Sendak who illustrated Ms. Zolotow’s “Mr. Rabbit and the Lovely Present” ( Caldecott Honor Book) as well as “The Storm Book” illustrated by Margaret Bloy Graham.

William’s Doll set the tongues wagging in the world of picture book in 1972 when it was published. William, a boy, wanted a doll! Gender identity was not even on the radar screen back then. Boys were boys and girls were girls. Boys were sports minded , rough and tumble and athletic. And William IS all of those things…but he wants a doll. And it sends tremors through the household.

He wanted to hug it

and cradle it in his arms

and give it a bottle

and take it to the park

and push it in the swing

and bring it back home

and put it to be.

and pull down the shades

and kiss it goodnight

and watch its eyes close

William wanted to wake it up

when the sun came in

and start all over again

just as though he were its father

and it were his child.

Poor William! Remember this is the 70’s. Opprobrium of “Creepy” and “Sissy” descends on William by his brother and friends, who for the life of them cannot figure this boy out who is not in lock step with what a boy should care about. And they are cruel.

His Dad buys him a basketball and he’s good at it. He buys him an elaborate electric train set and he sets it up and enjoys it and is good at that as well.

BUT, the doll dilemma continues until his grandmother comes to visit. William show her all the toys and she is very interested:

and they went for a walk together

what I really want

it will make me a creep

and the boy next door

And SHE proceeds to buy William his doll.”

What ensues from this is high dudgeon from dad. Just why does he need a doll when he should be doing “boy” things?

And grandmother’s wise and savvy response is one for the ages:

and to take to the park

he’ll know how to take care of his baby

and bring him the things he wants

so that he can practice being a father.”

Fatherhood is a huge role in a child’s life….like motherhood. But, it seems that the roles and the emotional content of those roles was fairly neatly divided into the emotional side of nurturing and care-taking and the practical side of teaching fatherhood by doing the “guy things”…sports, tools, building and doing adventuresome male bonding activities.

But, “William”s Doll ” was a pretty evolutionary and revolutionary concept in its day. And that was the idea that tenderness, nurturing, care taking are equally important in setting the skill set stage for the next generations of fathers.

And reminiscent of the recent movie that I saw called “Inherit the Wind”; a dramatization of the Scopes Trial in which Clarence Darrow and William Jennings Bryan argue Darwin’s “The Origin of the Species” versus “The Bible” and the right of the former to be taught in high schools, there can be differences of opinion and no one right way. Each has merit and something to add to an understanding of man and his place in the world.

Spencer Tracey, as Clarence Darrow, has a great line when he says, “The Bible is a good book; but it is not the ONLY book.”

I love that line.

And so it is with the 1972 picture book called “William’s Doll,” by Charlotte Zolotow. And before I forget, William Pene Du Bois’s art is spot on in its depiction of the duality of William’s struggle. The art is a mime of Williams’s  tender touch and care of the would be doll, side by side with the fun athleticism he enjoys as well. And there is a softness to the art that is perfect.

It’s a window into the many ways of being a boy and the learning curve it takes to become a father that starts EARLY!