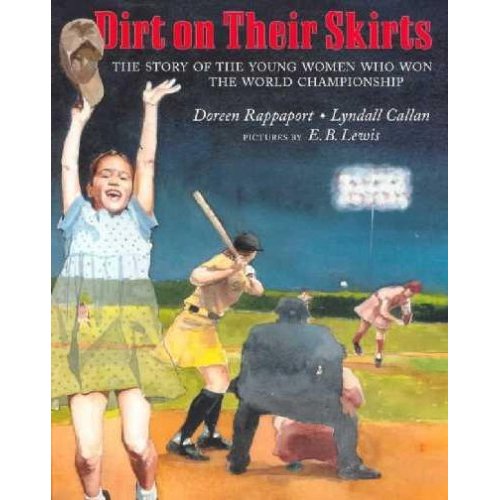 Dirt on Their Skirts

The Story of the Young Women Who Won the World Championship

By Doreen Rappaport and Lyndall Callan

If you’ve seen the 1992 movie A League of Their Own starring Tom Hanks, Madonna, Geena Davis and Rosie O’Donnell among others, you’ve gotten a good intro, although a fictionalized version via Hollywood, of this book.

It relays an important chapter in the history of women’s sports with its story of the All-American Girls Professional Baseball League. This was the name that former players dubbed this group of remarkable women athletes.

Rosie the Riveter becoming a national symbol for women on the home front assuming places in factories and elsewhere as huge numbers of men departed for war. This switching of roles built up morale on the home front.  But something else had the same effect of morale boosting – women’s baseball!

The women’s baseball league was the brainchild of Philip Wrigley, owner of the Chicago Cubs. Worried that interest in baseball would fade in the war years with male baseball players absent from the game, he started a women’s professional league in 1943. In the “Author’s Note” from Dirt on Their Skirts comes a pretty good thumbnail sketch of the league:

“Among the eight teams in the Midwest were the Racine

Belles from Wisconsin and the Rockford Peaches from

Illinois. In a grueling four-month season the women

played one hundred and twenty games, one every night

with doubleheaders on Saturday or Sunday. At the end of

each season the two best teams of the league competed

Dirt on Their Skirts frames the story of the thrilling championship game with the fictitious Margaret, soda pop in hand and family in the stands cheering on their hometown team, the Belles. The details of the game as written in the book are factual and have been drawn from newspaper articles and interviews with players there that day, including Sophie Kurys, Betty Trezza, Joanne Winter and Sue Macy.

How this one amazing championship game is played out becomes part of the joy of a peek in to a sports’ past young girls should be made aware of and proud to follow in their own local versions of that great American pastime of baseball.

In 1988, the Baseball Hall of Fame in Cooperstown, New York gave these superb athletes their own exhibit as a way of honoring their achievements and contributions in the years of 1943 to 1959 when it was disbanded.

Young girl athletes will be inspired by this tale of women whose real pictures grace the inside front and back covers of this book. The sound of “Play Ball” may have an intense meaning for kids after reading Dirt on Their Skirts. It was so much more than a game for the thousands of fans who followed their pioneering efforts in sports and in raising the morale of a country mired in war.

And it continues to be the Great American Pastime with Dirt on Their Skirts providing a wonderful look back into women’s baseball and its pioneering past.