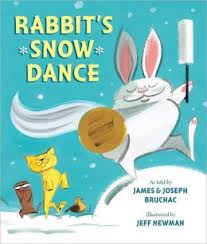 Patience Is a Virtue!

As told by James and Joseph Bruchac; illustrated by Jeff Newman

A picture book featuring a Native American based fable weaving folklore and interspersing it with the importance of virtues such as patience and I’m in. And so will your young readers be as they call to mind this book whenever they see the white stuff descend from the sky this week and all winter long. Perhaps they will have a new take on the origination of the frothy flakes once they read the funny and fanciful Rabbit’s Snow Dance.

This particular hare loves winter, but balance and moderation, as in everything, is key. He may well be a snowshoe hare for all we know, but is that any reason to use a traditional Iroquois drum and son accompaniment to make it snow – even in summertime?

In winter, his snowshoe feet can stand on top of snow and reach the tops of the trees for tasty treats left hanging. But in summer, no go. Sooooo, his wishing for snow translates into the real deal as this hare is in possession of the words to a special song to make it SNOW and it goes like so:

I will make it snow,

I will make it snow,

In case you’re in need of a translation, AZIKANAPO means it will snow “great, big flakes!” He even gets a drum into the act when the white stuff doesn’t appear fast enough to suit him. Can you imagine the fear aroused in the other forest folk, namely squirrels, chipmunks, turtles, bears, beavers, otters and the like? They’ve not had time to prepare for the early onset of Ole Man Winter kind of taking them by surprise. No nuts are stored or dams completed and never mind not being in the mood for a sleepy winter of hibernation and a long winter’s nap at the height of summer!

But folks, this is one hardheaded hare!

Using a continuing series of chants, the animals at first join in the fun, as they like playing in the snow too. But as the flakes fly thick and fast, so do the animals, for the snow continues falling up to the chests of the larger animals and the lot of them flee for shelter.

Think this stops the hare? Heck no. He keeps on singing, dancing and playing that drum. Kids will definitely relate to the woodland creatures that feel enough is enough, as they’ll probably ask you, “Is he EVER going to stop?”

The answer is …  eventually. But what happens as a result is a tale worth telling of a tail, and how the rabbit winds up with the shortened version we see today.

Jeff Newman’s predominant use of blue as the snow starts flying will have young readers identifying with those forest folk in wishing the rabbit knew another tune. It certainly revs up the chill factor! The fable by this father and son storytelling duo is fresh, fun and full of chants the listener will want to have a go at. Use sparingly, PLEASE!

They’re predicting snow this week, dear reader, and I could have sworn I heard some faint sounds coming from the forest, like a small voice singing along to a constant drumbeat. Oh no!

Get out the snow shovels, folks. It’s the rabbit that loooves snow. So do I, but I draw the line at chest high!