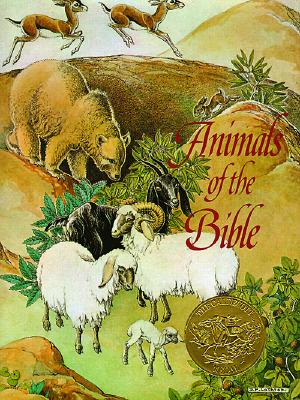 Way Back Wednesday Essential Classic: Celebrating 75 Years of the Caldecott

Animals of the Bible

Have a look at the very first title that, in 1938, was the recipient of the very first Caldecott Medal, awarded for the “most distinguished picture book of the preceding year.”

Ms. Lathrop chose in her black and white drawings to introduce young readers to some of the most memorable animal creations from the Bible. It seems to me a great choice, for kids have a natural fascination with animals, and when you couple that with stories of animals from probably the best selling book in the world, you’re on to something. I think Dorothy Lathrop was, with the talent to realize her creative vision. Apparently the first Caldecott committee thought so too.

Ms. Lathrop’s drawings from the Old Testament are quite detailed in their depiction of the “two by two animals” from Noah’s ark. But she does get into the less well-known, but no less fascinating animals from the Bible. Watch out for her detailed rendering of the giant behemoth, described with “bones as strong as pieces of brass; his bones are like bars of iron”, and the leviathan, best described with these words: “Out of his nostrils goeth smoke, as out of a seething pot or cauldron.” Her drawing literally brings the dragon-like biblical imaginings to life!

Her drawing of the eagle and accompanying quote taken from Isaiah is fittingly majestic and powerful: “…they shall mount up with wings as eagles; they shall run, and not be weary; and they shall walk and not faint.” The strength of the eagle shown here can buck up the meekest of the faint of heart! Daniel, surrounded in the lion’s den, is one of my favorites where Daniel, surrounded by a pride of hungry lions at the king’s order, is spared by the ministering of an angel who guards him throughout the night.

And after you see poor Jonah swallowed up by the great fish for three days and three nights, I’m sure young readers will celebrate his return to dry land. I know I did.

Here, the sparrow, pelican, ant, greyhound, camel and even stork have their say and day in the Bible, though briefly.

From the New Testament, the animals of the manger are nobly presented, followed by stories of the fish caught at lake Gennesaret, when after a night of slim results, the fishermen cast over the side one more time at Jesus’ suggestion, and their nets fill to the breaking point.

This beautiful first winner of the Caldecott ends with Lathrop’s drawing of the vision of “The Peaceable Kingdom” where all conflict between man and beast cease with these lyric words:

“The wolf shall dwell with the lamb and the leopard

shall lie down with the kid; and the calf and the young

lion and the fatling together; and a little child shall lead them.”

The rich word imagery from the Old and New Testaments, coupled with Dorothy Lathrop’s extraordinary drawings make this biblical picture book of the beasts of sea, land and air, something beautiful and educational to be introduced to children. And it allows them a peek at this earliest beginning of the legacy of the Caldecott.