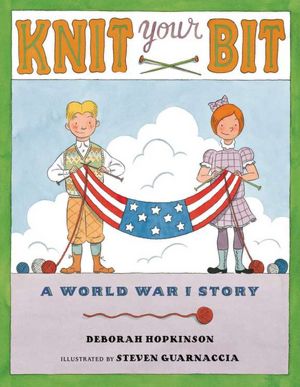 Knit Your Bit: A World War I Story

Memorial Day is May 26th this year and for those that are not old enough to remember its beginnings, it started off as Decoration Day following the Civil War. One General John A. Logan initiated the decorating of the Arlington Cemetery graves in Washington, D.C. of both the Union and Confederate soldiers that had died in the War Between the States. That tradition started in 1868 with a proclamation to observe Decoration Day “annually and nation wide.” Earlier ceremonies in Charleston, South Carolina in 1865 preceded even that marking of the tradition. Since then, it has morphed into Memorial Day when ALL men and women in our country that have died in wars are honored. Today, it is celebrated on the last Monday in May. It seems also to have become a line of demarcation that heralds the beginning of the summer season starting on Memorial Day and ending on Labor Day.

It also began the start of a long series of weekends when families could gather for concentrated time together. And that’s a good thing. But something may have gotten lost in the message of Memorial Day. That something is remembering and honoring those for whom time is a memory; the men and women that have given their lives in service of our country.

It should be an essential that as our young people grow, as part of their life lessons of service and sacrifice for others, one highly teachable moment comes certainly during the observance of Memorial Day. We hope it will continue to mean more than an opportunity for sales at malls and a barbecue at the beach. And for it to mean more, we as parents and educators have to teach more in what we model to them.

In 2000, a National Moment of Remembrance was instituted at 3pm on Memorial Day, meaning in whatever way what one sees fit, one is asked to set aside a moment to honor those that made the ultimate sacrifice for our freedoms. And what more teachable vehicle is available for young ones than the picture book?

Enter “Knit Your Bit: A World War I Story.” Starting out as “the war to end all wars,” it frankly failed in that regard as history tells us. But in “Knit Your Bit”, young readers will encounter a stirring historical fiction picture book based on a real event that occurred in Central Park in 1918. It was preceded by a wave of practical patriotism that swept a nation and showed that those “also serve who stand and wait”, otherwise referred to fondly as the “home front!”

Enter Ellie and Mikey, a young elementary brother and sister whose dad is off to war. What else can they do but wait and worry? Well, they can KNIT! Huh? Yes, this grass roots movement, begun by the Red Cross, stirred the country, young and the not-so-young, to knit much-needed hats, gloves, and scarves for soldiers like Mikey’s dad that were far away from home. And knit they did – men and women and boys and girls!

Naturally the young male contingent would be a mite put off by the thought of girly knitting bees, but boys will always rise to the challenge of a COMPETITION with the GIRLS!! A weekend knitting contest in Central Park that actually took place is the impetus for Mikey and his pals to “purl” up a storm and put hand to knitting needle. For the young boys it means contributing to the comfort of those far away and learning a new skill at the same time. It’s a sort of “two ‘fer.” But will the boys be up to the challenge? Will anything less than a win be a success in their eyes? Read and see.

The inside front and back covers of the picture book are filled with amazing black and white photos of actual groups of boys and girl in theirs knitting classes in action! One in particular shows a group of about 20 young boys, yarn and needles in hand as they do their best to keep the soldiers warm.

Knit Your Bit is a story of events that don’t hit you over the head with a patriotic plug or the generic “thank you for your service to our country”. The meeting between Mikey and a young soldier just returned from the war brings the meaning of real sacrifice home to Mikey and I think it will to the reader as well. As Mikey sees the empty pant leg of the soldier on crutches, he realizes that his male pride has suffered not half as much as has the young soldier.

Knit Your Bit is a good piece of historical fiction that allows picture book readers a window into a past that seems to have less and less relevance to them as we become further removed from these events.

Such reminders as Knit Your Bit serve as great picture book vehicles that model to children just one of many ways to become compassionate and caring of those to whom we owe much as a nation.

Now just how does that pattern for the sock go? Knit one. Purl two? Oops, dropped a stitch, darn it!

*You can STILL Knit Your Bit! Knit Your Bit groups continue TODAY and if you want more information, here is a web address to find out more about participating.