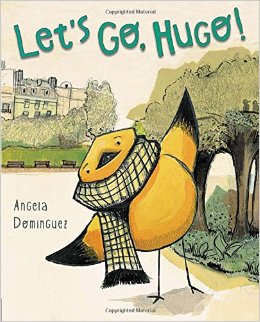 On This Day 50 Years Ago, Man Took “One Small Step” On the Moon! Here’s A Picture Book For Young Readers About Taking Steps to Freedom From Fear!

Of all the childhood emotions, fear is probably the one that kids struggle with the most. And some of them may struggle a long time.

So why not use a picture book to shorten the struggle?

Meet Hugo, a yellow bird with a dashing plaid yellow and black scarf tossed casually about his neck.

And Hugo is a walker, not a flyer. Hmmm. Odd. Hugo is a bird….. that has a fear of flying. He walks everywhere. If he can’t walk there, well it’s either off his bucket list, OR he makes a whole host of convenient excuses to his very understanding friend, Lulu, why it’s inconvenient.

Instead of living on the tops of trees

Hugo lived in a burrow down at the bottom

Instead of building nests,

Then, a moment of facing fear arrives. A suggestion that they visit the Eiffel Tower comes via Hugo’s friend, Lulu.

Tower? Height? Flight? And Hugo’s fancying this flight devolves into a number of rationalizations why the trip should be postponed.

A suggested trip to the park intervenes to put Lulu off the scent, followed quickly with a popcorn gorge. And really, how can one fly on a full stomach? There’s a romp in a fountain with the quick observation by Hugo that they must wait for their feathers to dry before taking off. Why not a visit to the ballet, instead?

And the ultimate excuse as night descends:

It’s dangerous for me to fly at night.

Let’s go in the morning.

Lulu has had it and yawns off into the night.

But, hopelessness is not in the cards for this bird, as Bernard, the wise barn owl, learns Hugo’s secret fear, blurted out in a moment of exasperation. Owls are wise, and Bernard is a soother as well:

Well, everyone is afraid of something. I was afraid of the dark, but then I realized all the wonderful things I was missing, like the moon and the stars. If you want, I’ll help you practice.

Sometimes we may forget that it takes a bit of courage and the encouragement and sharing the shoulder of people with similar fears, to let kids know it’s okay to be afraid.

But, on the other side of that fear is such a terrific feeling of accomplishment, pride with the resultant new adventures to be shared with others.

And, as young readers learn along with Hugo, it takes practice, and the friendly face of someone that’s been there before them to point the way!

All of us need advice from time to time, and young readers need to know it’s perfectly okay to ask, and then practice what they learn.

And that is what Hugo, soaring towards the Eiffel tower, discovers with Lulu in tow:

The Eiffel Tower was more beautiful

than Hugo had ever imagined. So

beautiful, he forgot to be afraid.

In the cover flap bio of her picture book, Angela Dominguez is forthright enough to mention “she occasionally needs a friend to help her take a big step.”

Angela, I think we all need that every now and then.

And now, thanks to you, Hugo and an avian friend named Lulu, and a barn owl named Bernard, young readers know that the ability to learn how to get some courage, is only a friend or two away

*** On this 50th Anniversary of the Moon Landing, listen to this homage to the moon called, “Mr. Moonlight” by none other than….the Fab Four….the Beatles!!!