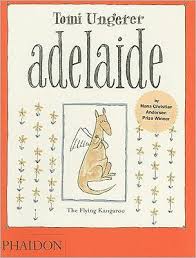 Kangaroos with wings? Bats bored with dark caves, and LOVE color, so much so that he PAINTS his wings? Ogres that are gourmands? Boas that can constrict into the alphabet and help around the house?

Welcome to the sometimes upside down world of celebrated French picture book author/illustrator, Tomi Ungerer, winner of the Hans Christian Andersen Award for his art’s enormous contribution to children’s literature.

Mr. Ungerer passed recently, and here at The Snuggery, we have been attempting to honor him by  bringing to the fore many of his picture books that may have slipped your notice.

“Adelaide: The Flying Kangaroo” did slip mine…till now. And she is more than worth a passing look.

Tomi Ungerer had an uncanny ability to take what we assume about something and turn it on its ear…wonderfully; as he has here, in “Adelaide:The Flying Kangaroo.”

If elephants can fly via Walt Disney and the iconic ‘Dumbo”; he of the ginormous ears, then it’s certainly a given that a female kangaroo can be born with wings, no?

And so it is with the “brave and adventurous” Adelaide. These phenoms never stay in one place, but must surely test their wings in the world, as it were.

From her desert birthplace, she bids her parents adieu and is off, via a chance meeting with a pilot, to India and Paris.

Chance beckons again as they land in Paris. In the person of a French gentleman named Monsieur Marius, he invites Adelaide to dine, followed by a tour of the Eiffel Tower, museums, monuments and Notre Dame where:

Adelaide was frightened by the fierce gargoyles…

but the peaceful angels comforted her.

Adelaide becomes an overnight star, courtesy of Monsieur Marius, and it looks like life is calming down to a steady pace when:

Then one day when she was taking a walk she came upon a blazing fire.

A woman was crying and screaming.

Her two children were in the house.

the smoke toward the children.

She put the baby in her pouch and the little girl on her back.

But the load was too heavy and she couldn’t fly.

She fell all the way down.

Adelaide was hurt. But the children were safe.

Adelaide is rescued and brought, via ambulance to convalesce, with the bountiful thanks of the mother and children.

And, the best is saved for last, as Adelaide, this time, chances upon LOVE in the persona of Leon, on a trip to the zoo.

Adventures follow her to the altar with Leon by her side and her future role as momma kangaroo, it’s made clear, could only have happened with “her special set of wings.”

Ah! Adelaide and Tomi, you won my heart with the realization that chance and the different routes that being different takes us in, can lead to new beginnings and experiences that do not limit, but expand our experience of what life can offer us.

Tomi’s black and white drawings, with touches of tan (for Adelaide) and the softening effect of a light blue in a waiter’s vest, the sky, Monsieur Marius’ coat, a chair’s seat,  shutters on a flaming window and her hospital blanket, calm the narrative at just the right moments.

If you are ever in Strasbourg, France, there is the “Musee Tomi Ungerer” that opened in 2007, and is devoted solely to his amazing artistry.

Tomi divided his time between Strasbourg and Ireland.

Please do let your young reader sample any or many of his picture books. They are as unusual and fulfilling as any I have read.

Tomi, your classics remain to inspire and feed a generation of new young readers with art and narrative to feed both eye and ear.