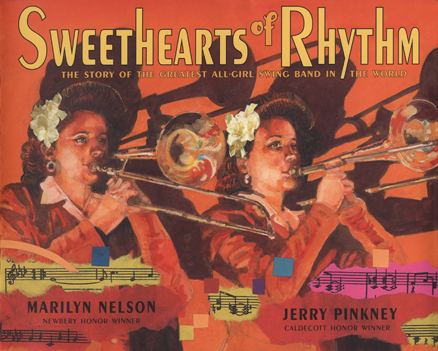 The double whammy of a Caldecott Honor winner and Newbery Honor winner is a sure bet that something good is coming, and it is and it has, in the stirring poems and vibrant images of Sweethearts of Rhythm , The Story of the Greatest All-Girl Swing Band in the World, written by Marilyn Nelson and illustrated by Jerry Pinkney.

To Malia and Sasha Obama,

Their dreams, and the dreams of other young women of their generation.

May the music continue.

In the 1940s a world was at war, and the population at home and abroad hungered for a renewal of heart, hope, and resilience, fearful of succumbing to an overwhelming sadness born of unrelenting sacrifice and sorrow. Names like Johnnie Mae Rice, Ernestine “Tiny” Davis, Pauline Braddy, Willie Mae Wong, Roz Cron, and Ina Belle Byrd were some of the talented and remarkable women who comprised a historic band whose mission was to lift a nation musically, and it succeeded wildly. It was, as they say in the biz, “boffo.” In places like The Cotton Club, The Apollo, The Royal, and a USO tour of Europe, this interracial group formed a bond and won hearts and enlivened dispirited Americans.

Within a profession dominated by male musicians, the group’s artistry and heart were emblematic of the very ideals the war was being fought to preserve: freedom and equality. These women used their talents to uplift a nation’s morale. The fact that our nation did not allow them the very privilege the war fought to preserve is amazing and abhorrent.

Each poem, whose persona is sometimes an instrument, tells the story with a life-giving rhythm coupled with arresting images in vibrant and sepia-hued tones. This book reminded me in a way of a movie called The Tuskegee Airmen, the true story of the all-black fighter squadron in World War II. Through persistence and performance, they earned a place in the mission to escort white piloted bombers over Berlin. They lost not a single bomber and they were the only bomber group to accomplish this feat.

Music in its own way defied the odds, and, as one of the poems states:

“I see. So every swing band, without speaking its name,

sort of thumbed America’s nose at the threat of fascism?

Swing music wasn’t half as vapid as it seemed!

You were bringing the madman down, just by swinging the rhythm!”

Marilyn Nelson and Jerry Pinkney make beautiful music together in this soul-stirring book!

As I grow older, the perspective of time has given me a greater respect for the 1940s.  It reflects a time period and population fondly referred to as “The Greatest Generation.”  They lived through and survived not only the Great Depression, but a world war.

They did so without complaint, with dignity, grace, strength, and unity of spirit. I sometimes wonder whether we will see its like again. Maybe that is why I would have loved to have been a part of it. The culture, values, music, clothes, intact institutions; all of it really appeals to me. Just like the Walter Mitty character in the popular Danny Kaye movies, I can picture myself driving a woodie station wagon, my feet shod in brown-and-white spectator pumps, my head covered in a small hat with a veil at eye level, and white gloved hands at the wheel. Perhaps we long for and hope our children can see again a time, other than one in which, as the poet Yeats said, “Things fall apart and the center cannot hold.”

The spirit, resolve, and daring of the 1940s is what the reader unflinchingly meets in Flygirl by Sherri L. Smith. It is a fictionalized portrait of the WASP, a civilian group known formally as the Women’s Airforce Service Pilots; seldom-mentioned members of “The Greatest Generation.”

In it we meet Ida Mae Jones, a young black Louisiana woman in love with flying, a love inherited from her father. Defying societal norms and family disapproval, Ida Mae alters her father’s pilot’s license to gain acceptance to the WASP, where black women are not welcome. Facing fear of discovery and doubts of her own abilities, and maneuvering between the set rules of the black and white communities she inhabits in pursuit of her dream of flying, she discovers a larger truth about herself and the goals she has set, whether appreciated, validated, or no.

“War is about sacrifice,” Ida Mae’s wise and practical grandfather Grandy reminds her. It comes on many levels: in the tragic loss of a friend and fellow pilot; in a mother’s counting of ration stamps that keep a family fed and intact; a brother wounded in the Pacific and countless others she meets. War is the common thread binding their efforts and sacrifice for the greater good—an end to the war.

Ida Mae learns the hardest of lessons: You must be yourself wherever you are, in whatever situation you find yourself, lest you lose who you are at your core. She must not lose her inner truth in the pursuit of a dream. Ida Mae’s finding of this truth in this wonderfully told book, laced with keen insights and fact-based information about the double drawback of being black and a woman in the 1940s, ends as she finally earns the silver wings she deserves and finds it was worth the journey. She truly is a “Flygirl” in every way that counts.

As a side note, during World War II, the WASP performed amazing tasks, ferrying aircraft from factories to military bases and towing aerial targets. Numbering 1,074 women, they served as pilots in the war and, in the process, freed male pilots for combat service. Unsung and unrecognized by the military, they were finally granted veteran’s status by President Carter in 1977 and the Congressional Gold Medal in 2009.

I highly recommend this book for a young adult audience, as it provides a fictionalized and extremely well-researched window into a time period where selflessness and self-sacrifice were the order of the day. I think that young girls will strongly identify with Ida Mae and her desire not only to dream big, but to remain true to herself in the process.