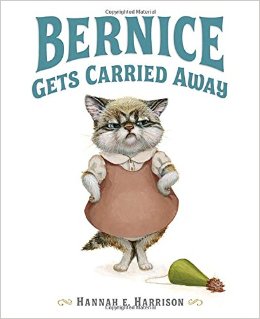 Being the Best You Can Be

Bernice Gets Carried Away

Bernice is late to the party, last in line, at least in her own mind, to what she thinks she is entitled to.

From a rose atop her slice of the birthday cake to the bottle of left over prune grapefruit beverage, to the “one lousy gumdrop….that someone had stepped on,” it’s all that remains from the birthday piñata poking that she hasn’t even taken one swing at. Bernice is one unhappy party goer.

Bernice is feeling, well, in a bad mood, and further she is going to get her just desserts, come what may.

Ms. Harrison has stuck a cord with her themed books like “Extraordinary Jane” and here, in “Bernice Gets Carried Away,” of the kiddie culture of competition that School Library Journal so rightly expressed what “entitlement and everybody gets a trophy” thinking has lead to, where it said of “Extraordinary Jane”:

In a world full of competition

for kids to be the fastest, smartest,

and best at everything, this story’s

message is a worthy one.

Here, in “Bernice Gets Carried Away”, this small cat in a kerfuffle, literally and figuratively is, when, because of a sour mood, borne of being last-in-line for goodies, Bernice makes a grab for the gold ring…a bunch of balloons that are to handed out to each birthday party goer.

And, she’s off with her prize… and literally up in the air over her good fortune at being first…or is she?

Aloft and stuck in a similarly “brooding black rain cloud,” Bernice previously has seen a squirrel in a snit, and a harried mother bluebird who has a trio of true responsibility poking out of the knothole of a tree Bernice floats by.

Empathy begins to slowly overtake the brooding Bernice, as she realizes from her heightened perspective in the sky, that “her problems felt pretty small” and she “felt pretty small herself,” as a result.

How do you make yourself feel better when life seems unfocused and unfair?

Bernice gets the message pretty quickly that lightening her emotional load of a bad mood will come from sharing the wealth of what she has. And she does.

By gifting the bunch of balloons to others, she literally and figuratively comes down to earth…and so does her ego, that says “What about me?” and “Where’s mine?”

Ms. Harrison’s book has focused the picture book message that continually needs to be brought home to young ones on the learning curve of life. And it needs to be recounted over and over in our current competitive culture that starts so early in life.

Is striving important? It is. But there is something that gets lost it seems in the message the culture gives our children. And it seems to be a double-edged sword.

On the one hand, the culture seems to say, “win at all costs”, and on the other, it says, just “showing up” is enough. Neither one is acceptable, I think. But there is a third alternative that used to be the norm for most kids in a land far away called yesterday.

It stressed concentrating on being more in relationship to others that one comes in contact with in daily living, instead of having more?  And from that kids got the message, and the message was… Why not try being your best self?

Bernice is a winner no matter where she lands in life. She knows who she is, and more importantly what really counts….and it’s not the biggest bunch of balloons.

It’s being the best Bernice, regardless of where she is in line.